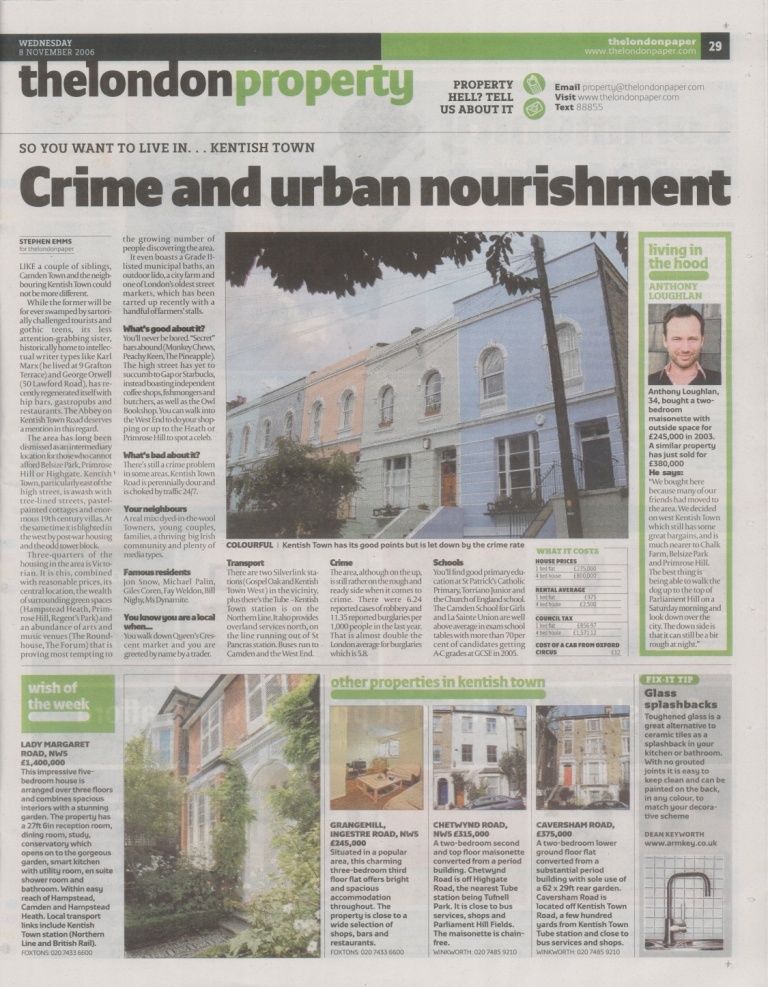 What with the Evening Standard covering Kentish Town in their weekly Homes & Property section today, we thought it might be fun to re-publish a piece I wrote for the London Paper, the briefly successful free daily tabloid (and Standard spoiler, lest we forget) that ran for three years in the late noughties.

In fact, back in November 2006, these were – for better or worse – my first ever scribblings on Kentish Town, predating the birth of this site by four years.

While being something of a dry “property pages” article, as a historical document seven years later it makes quite interesting reading. There’s obligatory mention of the area’s underrated qualities, strong geographical attractions, and “secret” bars like Peachy Keen. There’s my first use of the word “Towners”; and (oops!) the suggestion that Kentish Town Road is “perennially dour”. Most shocking? Well, house prices, natch.

And no, the dreadful punning headline wasn’t mine. Obvs. Right click the page above to view the image at full readable size, or if you can’t be bothered here’s the text in full:

Find out more about video ads for your business
This is box title
The London Paper: So you want to live in…Kentish Town?

Like a couple of siblings, Camden Town and neighbouring Kentish Town couldn’t be more different. Whilst the former will forever be swamped by sartorially-challenged tourists and gothic suburban teens, its less attention-grabbing sister, historically home to a more literary crowd including Karl Marx and George Orwell, has recently regenerated itself with hip bars, gastropubs and restaurants.

Long dismissed as an intermediary location for those who can’t afford Belsize Park, Primrose Hill or Highgate, Kentish Town (particularly east of the high street) is in fact awash with tree-lined streets, pastel-painted cottages and enormous nineteenth century villas (whilst at the same time blighted in the west by a few tower blocks and some ugly post-war housing). Three quarters of the area’s housing is Victorian, and it’s this availability, coupled with reasonable prices, its central location, the wealth of surrounding green spaces (Hampstead Heath, Primrose Hill, Regent’s Park) and an abundance of arts and music venues (The Roundhouse, The Forum, Bullet) that seems to be tempting young couples away from, say, Islington or Camden. It even boasts a Grade II-listed municipal Baths, an outdoor lido, a city farm and one of London’s oldest street markets, which has been tarted up recently with a handful of farmers’ stalls.

What’s good about it?
Location: you’ll never be bored. “Secret” bars abound (Monkey Chews, Peachy Keen, The Pineapple).The High St has yet to succumb to Gap or Starbucks, instead boasting independent coffee shops, fishmongers and butchers, as well as the large Owl Bookshop. You can walk into the West End to do your shopping, or up to the Heath or Primrose Hill on a Sunday morning.

What’s bad about it?
There’s still a problem with crime in some areas, and Kentish Town Road itself is perennially dour and choked by traffic 24/7. Pedestrianize this street now, Ken.

Your neighbours
A real mix: dyed in the wool Towners, mixed with young couples, families and plenty of media types.

You know you’re a local when…
You walk down Queen’s Crescent market and the traders know your name.

Transport
Two silverlink stations connecting East and West – Gospel Oak and Kentish Town West, plus Kentish Town station itself, on the Northern Line tube, and with overland services north on the line running out of St. Pancras.

Crime
The area is still on the rough and ready side. There were 6.24 cases of robbery and 11.35 offences of burglary per 1000 people in the last year – above the London average of 5.8.

Schools
Good primary education at St Patrick’s Catholic Primary, Torriano Junior and the Church of England school. The Camden School for Girls and La Sainte Union both got well over 70% A-C grades at GCSE levels in 2005 – well above the average.

And why not let us know what you think of today’s Standard piece below?