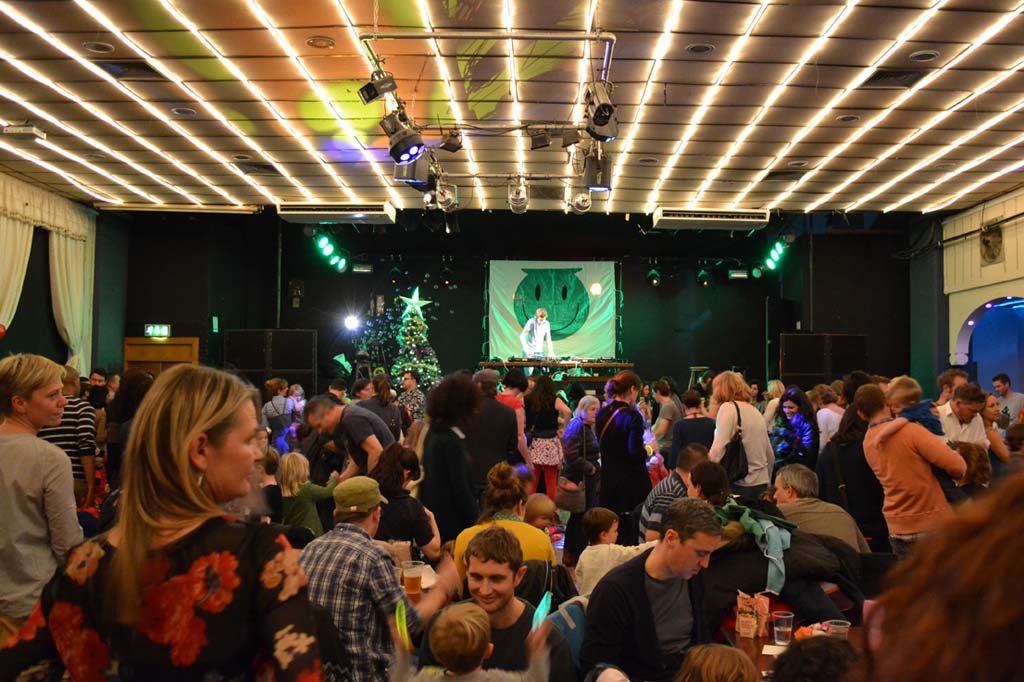 As any washed-up nightclub bore will tell you, ravers these days seem to be getting younger all the time. The generation that lived for the weekend in the 90s now find themselves entrenched in the freedom-curtailing certainties of family life, so it’s no surprise that the market for child-friendly festival experiences and baby raves is booming. The parents can’t bloody wait to get on the dancefloor and throw their hands in the air once again, under the bubble machine.

Having reviewed nightclubs for a living pre-kids, I know all about acting like a child on a dancefloor – professionally. But previous semi-desperate forays to daytime kiddie parties, such as an early trip to Baby Loves Disco in Clapham, have been musically more akin to a wedding bash than the kind of 5am at Fabric tackle I was craving.

So the promise from Brixton success story Big Fish Little Fish – a family event with proper music played by credible DJs – sounded well worth a try. Tufnell Park’s Dome was also the first ‘proper’ nightclub venue I ever went to, drawn to see a terrible guitar outfit in my La Swap days.

Tickled by life’s disco symmetry, we rocked up just before the music was due to start, the children immediately getting stuck in to glue and glitter on the craft tables (don’t remember having those at Turnmills). First tune, LCD Soundsystem’s Losing My Edge was an apt one for the dads attempting to dance for the first time with a papoose strapped to their belly.

DJ Miss JT built the intensity of her warm-up set skilfully, but the rapidly growing crowd needed no encouragement. The floor was already awash with writhing bodies – many of them horizontal and covered in Happy Monkey smoothie.

She upped the ante with Leftfield’s John Lydon infused Open Up as the throng began to melt in the heat – this really was becoming a sweat-box of a rave. Meanwhile at the door, through the equally packed chill-out space, non-ticket holders were being turned away. This junior rave was at capacity.

I slunk off to the toilets with a couple of girls, three of us giggling in a cubicle. Not quite as edgy as it sounds when the reality involved coaxing two daughters – desperate to pee but not liking the look of the fag burns on the toilet seat – to sit down and hurry up.

Back in the main room the bar staff seemed to be struggling to cope, even though demand for drinks was coming from less than half the crowd (a helpful Drink Aware sign reminding us of the law and its £5000 fine for purchasing alcohol on behalf of a child, lest we get carried away with this whole inter-generational raving thing).

The madness was reaching a peak, and the heat was proving too much for some. Views on the melee ranged from “soooo much fun” to “hell on earth” – dividing opinion just as every slightly off-the-hook rave should.

A few drooling ravers had to be carried towards the exit, whacked out of their minds on double scoops of Ruby Violet ice cream. But the parachute dance peak was yet to come, and it pushed proceedings into anarchic territory.

Si Begg’s own kids led the stage invasion. The 2-4 hour party people – as BFLF have cannily branded their clubbers – losing it to one last tune. And then it was over.

All back to mine for the Peppa Pig-themed after party.