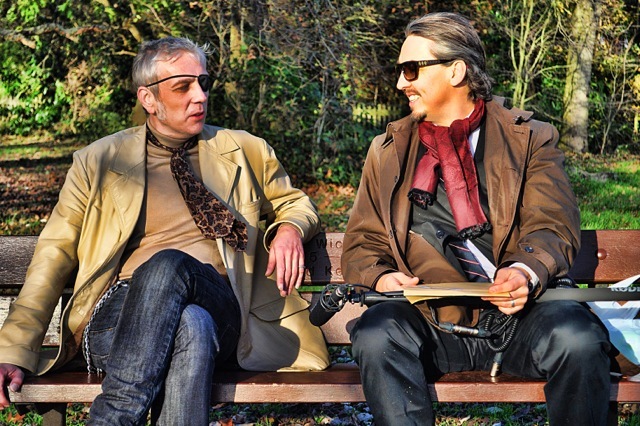 Tufnell Park-based composer Alan D. Boyd dropped us a line to alert us to Sendo Senshi, his score to a “fictitious” film. That’s right, a film that’s not film. Although there is a trailer.

Confused? Don’t be. “I wrote it as my alter ego,” he says, “Alessandro ‘Saseko’ Motojima, “the 70s master of b-movie and ‘whitexploitation'”. It all started when an artist who creates movie posters for imagined films of that era asked me to contribute a piece of music for a compilation album. Instead, I penned a whole score to the single poster of Sendo Senshi, which led to us filming a trailer – and then making more artwork to accompany it.”

Phew. And as you might imagine it’s a pretty cool slice of 70s-inspired kung-fu score music featuring K-Town musician MAo Yamada, written and recorded at Alan’s studio on Queen’s Crescent. Even Fun Lovin’ Criminal Huey Morgan has been all over a couple of tracks on 6 Music.

So convincing was all this that in a recent review for a US blog the writer admits that at first he thought it was actually a lost 1970s film: “then it hit him”, says Alan, with a smile.

And if you’re a fan, you might also be interested to know that his soundtrack to the 2009 BBC production of Day Of The Triffids (also recorded in his QC studio) was finally made available to download a week or so back too.

This is box title
Sendo Senshi (OST) is available on vinyl and cassette from Rough Trade records. Or you can download it, of course, from all the usual places. Find out more about Alan here