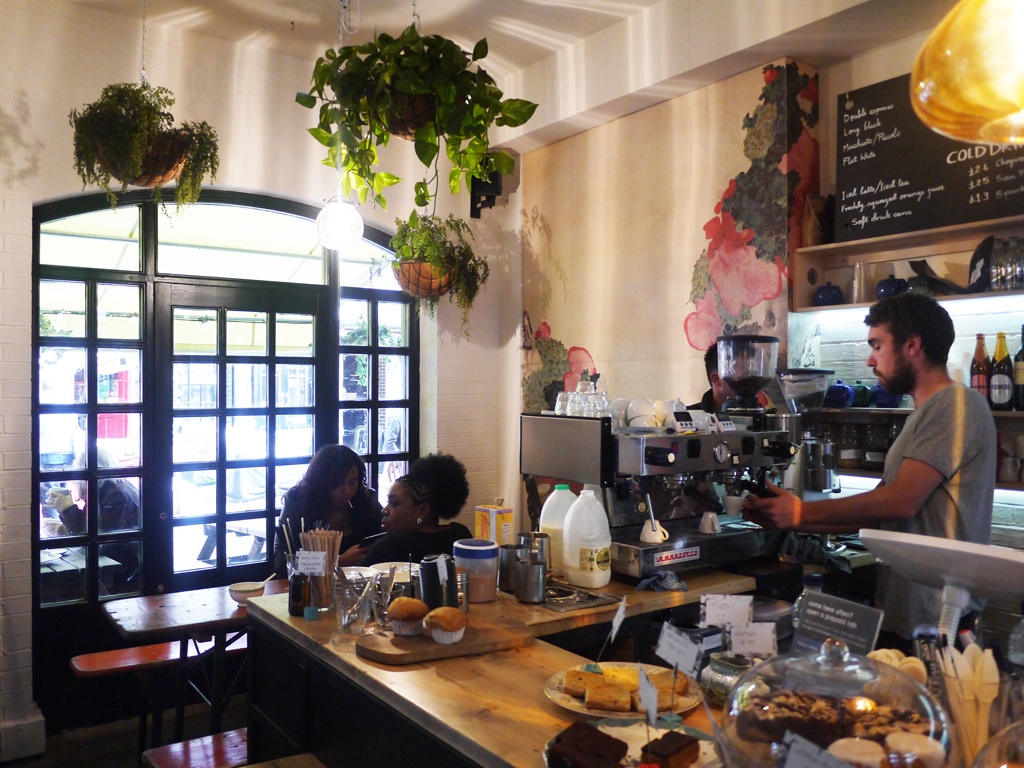 Owned by Michael Homan and sister-in-law Shelagh, Ruby Dock is the duo’s third outlet after the success of the acclaimed Lantana, off Goodge Street, and hipster caff Salvation Jane in Shoreditch.

All three are named after weeds that now grow in Australia but were first transported from other continents by immigrants. “It’s a metaphor for coffee cafés,” says Michael, “thriving on foreign soil and spreading the importance of a good blend to Londoners.”

On our recent visit, east London-based Square Mile beans were picked out by coffee maestro and manager Pete. “The current blend is 50% from one Guatamalan farm, 40% from another, and 10% Kenyan for the sweetness,” he explains, in an Aussie drawl, “but we change it seasonally as the climate affects the bean’s taste.”

Square Mile do direct trade rather than fair trade, meaning these nice guys fund improvements on the farms and then buy the whole season’s produce. Involved from the start, they assure the highest quality and fair wages. This way, the caring coffee punter can track every cost from pickers’ wages through to shipping to the price of the final cup.

At £2.50, Ruby Dock’s latte is nutty, silky and with not a single ounce of bitterness. “The milk brings out the roast’s creamy side,” says Pete, “if you order it black, it would have a citrus taste at the front of the mouth.”

Pete makes it clear that although the beans help, the sensational coffee is down to Ruby Dock’s dedication to perfection at every stage. The milk is organic and heated to 62 degrees, which extracts its natural sweetness. They have five different sizes to suit varying tastes: the usual espresso, macchiato and a new piccolo, “a smaller style latte”. A weekly changing guest blend showcases different roasters. This week it’s the fun-sounding Roasting Party.

So what’s the food like? A courgette, goat’s cheese and rocket quiche was a little watery, wedged in between an overpowering oniony fattoush salad and more hearty feta, chickpea and chorizo muddle.

“We don’t have a kitchen,” says Michael, “but we want to be known for our food, and we’re working on it.”

Fair enough. This is becoming a good spot, what with Honest Burger across the way too. And the continued reinvention of Camden Lock Market as a place to appeal to locals – not just swathes of cattle-like tourists – is encouraging. Even better, there’s a wine and cocktail list for a bit of night-time lounging.