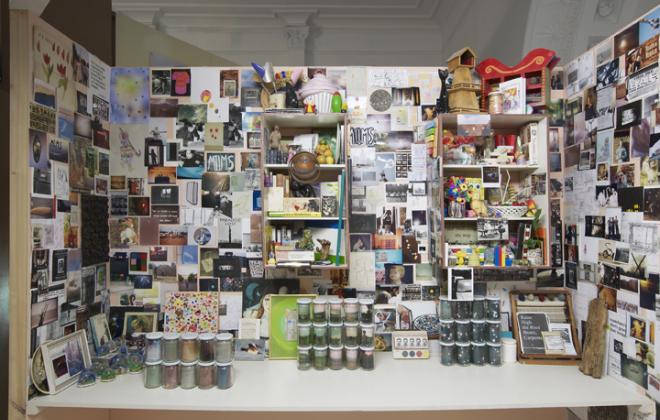 Review: Andy Holden at the Zabludowicz

What sort of art were you creating when you were 16? Bedford-born Andy Holden and pals invented a whole movement...

While most teenage boys lurk on street corners, wolf whistling at girls, smoking and necking whatever booze they can get their mitts on, Bedford artist Andy Holden and his pals (John Blamey, James Macdowell, Roger Illingworth and Johnny Parry) created an art movement.

Called M!MS (Maximum Irony, Maximum Sincerity), it stated that in order to make art, one must claim the position of both irony and sincerity in equal measure.

Cue school assembly-style songs, fridge letter magnet sculptures and collections of what appears to be charity shop fodder. All of which is on display as part of the the Zabludowicz Gallery’s latest exhibition of Andy Holden’s work. As part of their annual commission, the gallery has invited Holden, now in his thirties, to make a new work based on the M!MS ethos.

The result? An 18 month project starting with Holden gathering his childhood chums to record them talking about M!MS in order to write a script for a feature film to be screened at the gallery.

Holden cast a gaggle of teenage drama students from Bedford as the founding members and has them re-enacting the transcribed conversations he had with the original members. This is collaged with recordings of a children’s choir singing original songs written by the M!MS movement, also playing as the film’s soundtrack.

The collaged film is split into seven chapters and is projected amongst a swallowing sculpture, engulfing the room and angling cosy nooks and crannies, which are unusual to the conventional open white gallery space. It is made from parts of the original film staging and represents significant M!MS places. I sat down in James ‘Pups’ MacDowell’s room and chuckled at an original M!MS prank, where Holden and another member approach the public to shake their hand while the other takes a photo – surely exemplifying the irony strain of the manifesto.

The room is littered with original M!MS artwork: balls of fridge magnet letters glued together, photographs of people made 3D doll’s arm’s attached and a collection of multicoloured thread bobbins.

Holden makes the viewer very aware of the space. A staircase leading to a viewing platform, like a landing on a film set, with no attached rooms and another collection of snow globes, shoe horns and original chintzy ornaments.

Back downstairs and through a corridor is the second room, concerned with youth and childhood, and entitled Last Stop for Good Old Times (after The Age of Innocence) 1999-2013. More collections, this time in the form of 300 kitsch reproductions of paintings of children hoarded by Holden’s alter ego, Rudolf Schmidt. The quantity of doe-eyed child’s faces made the expansive room feel more empty – and slightly creepy.

The ironic ideas of M!MS have fizzled out for Holden so this project acts as a restropective for a still very infant movement. The multi-media exhibition awakens the senses and transports the viewer into the founders’ 16 year old minds.

It left me thinking, blimey, that’s a lot of work for someone so young to achieve.

1 thought on “Review: Andy Holden at the Zabludowicz”

1 thought on “Review: Andy Holden at the Zabludowicz”