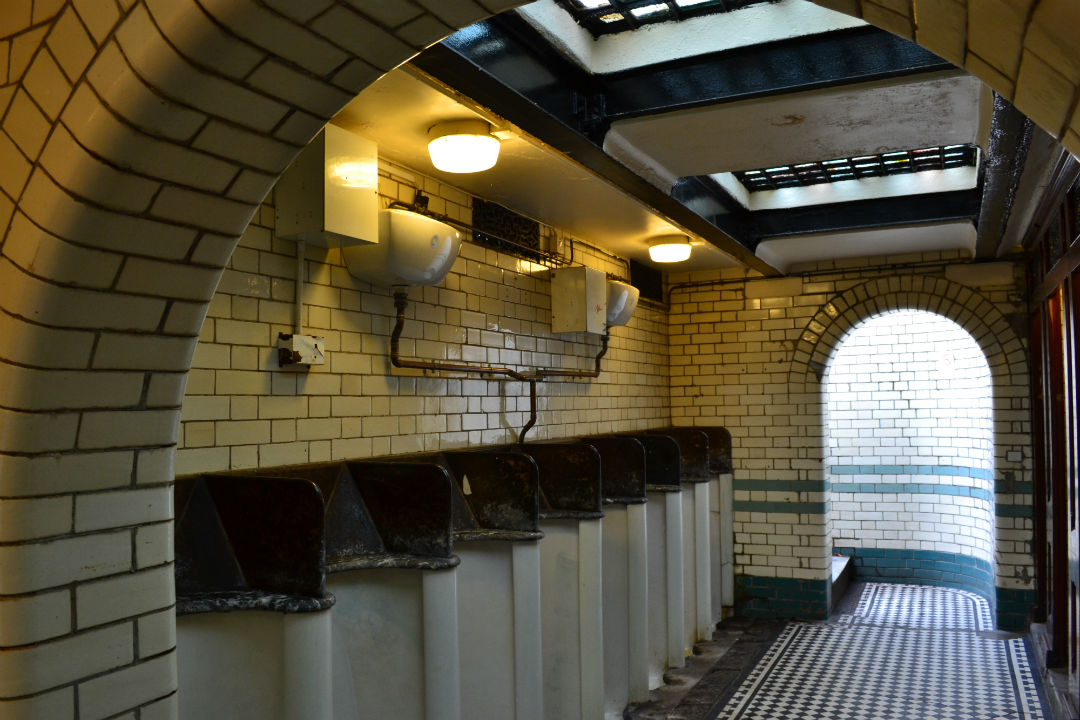 It’s many years since George Michael was arrested in the public toilets at South End Green, the busy little interjunction a cupcake’s hurl from Gospel Oak. So, we thought, isn’t it high time we, er, probe, this notorious public convenience?

First things first: this is an elegant bog. Probably the most spectacular in the capital. Built in 1897 for passengers at the tram terminus, it was listed in 1993 as one of the few remaining Victorian lavs in London, and lavishly restored a decade or so back. Look at that wrought-iron, for goodness’ sake.

But now let’s take a peek inside. Isn’t it – slight stench aside – almost glamorous? Something you’d imagine at the Gilbert Scott at St Pancras, rather than six feet under. Wall to ceiling tiling, porcelain, a hint of the gothic. The attention to detail and craftmanship is, in fact, embarrassing for such a transient experience. It’s not surprising a multi-millionaire gentleman pop star or two over the years has decided to linger a while.

But did you know that until the mid-nineteenth century the public convenience didn’t exist? It was only with the success of the Great Exhibition in 1851 that they started to spring up around the capital. Victorian engineer George Jennings was the man responsible, and a lav consisted typically of a tiled underground chamber marked by iron railings or arches at street level. The cost? A penny to use (giving rise to the gran-phrase “I’m just going to spend a penny”).

The word “cottage” – gay men’s slang for a place to pick up – was in use soon after, as so many toilets resembled cute cottages (there are several on the Heath, if you’re interested, sir, and one on Pond Square in Highgate too). Famous nicked cottagers over the years include Sir John Gielgud (fined a tenner for “persistent opportuning”), that bloke from 80s band Five Star, and MP Ron Davies.

But most memorably South End Green is the only public toilet still in use known to have been visited by iconic 1960s playwright Joe Orton. Apparently it was his “favourite pick-up point” too.* (Others he frequented included one under the railway bridge in Holloway Road and nearby Highbury Fields). These loos also justifiably starred in Prick Up Your Ears, the 1987 film about the scribe, who was murdered by jealous lover Kenneth Halliwell in 1967.

And George Michael’s own South End Green moment was recorded by the Metropolitan police thus: “I can confirm that a 45-year-old man was arrested on September 19 on suspicion of possession of drugs in the Hampstead Heath area. He was taken to a north London police station where he received a caution for possession of class A and class C drugs.”

Some believe this masterpiece of Victorian engineering should be a tourist attraction in its own right. The very thorough Bogblog (yes, really) here salutes the tiled catacomb:

So if you’re ever caught short as you approach the Heath, it’s worth remembering the ups and downs of this pungent gem that’s simply spilling over with history.

And in an interesting aside, did you know that George Bernard Shaw was responsible for the ladies’ toilets opposite Camden Town tube station? An alderman on St Pancras council, he proposed building something for women, and against deep opposition they were built – and still stand today.

This is box title
Source: *Literary London: A Street by Street Exploration by Ed Glinert