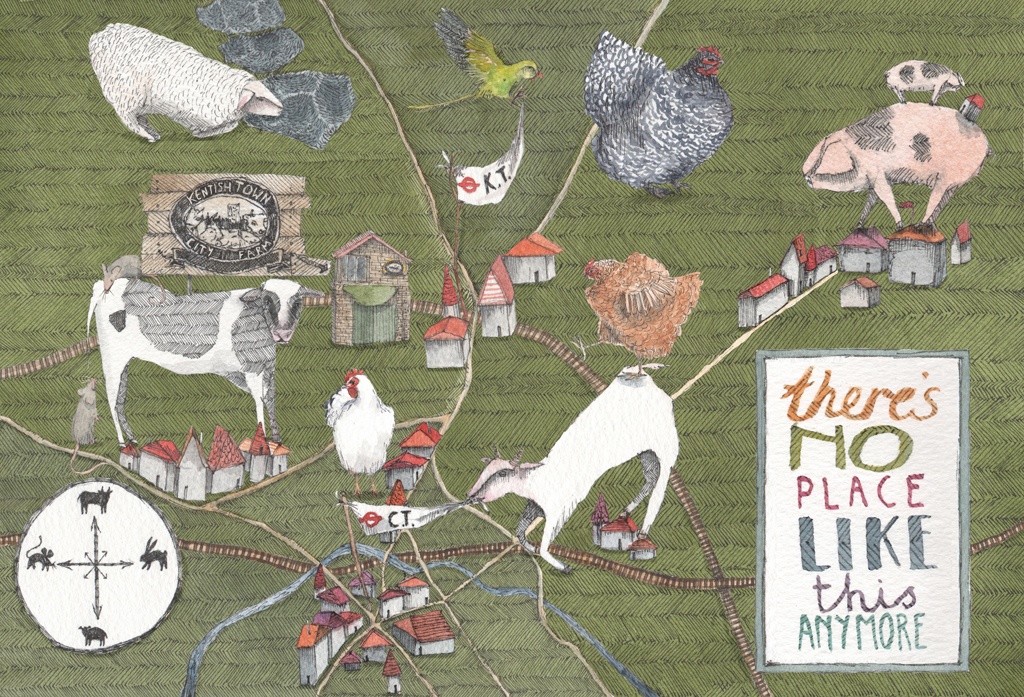 Most of us will know that Kentish Town City Farm – the oldest in the UK – has been celebrating hitting the big 4-0 all year. And don’t fear, while the beasties are all still safely locked up in their barns, on our September print edition cover illustrator Sophie Jamieson wondered what would happen if those two and four-legged inhabitants ran amok across the neighbourhood.

The work is entitled This is Interaction, a phrase inspired by the famous video of Prince Charles speaking about Kentish Town in the 70s. “The farm an inspiration,” she says, a “little haven in the scary big city.”

A far cry from the artist’s childhood in the wilds of New Zealand, it’s a “menagerie on the community’s doorstep, and has long encouraged people living in the city to interact with a different environment. And so I wanted to play with boundaries by unleashing the animals in this way.”

Jamieson’s first taste of K-Town was a job waitressing at the Bull and Last after graduating from Edinburgh College of Art two years ago. Reluctant to move to London, she told her fiancé she would only settle here if he found them somewhere “fun to live”. He came back with the idea of a houseboat near Regent’s Park – and she was sold.

“Being on the water really does inspire me,” she says. “It’s like a little nature-filled haven. I can hang out on my roof, watch the dragonflies and terrapins, and make duckling friends.”

When not chatting up all things feathered, Jamieson keeps it water-based and meets friends for walks along the canal, “which usually end at the Colonel Fawcett or a boozy meal in Caravan in King’s Cross.”

This is box title
Like Sophie’s work? Buy a limited edition print from our online shop.