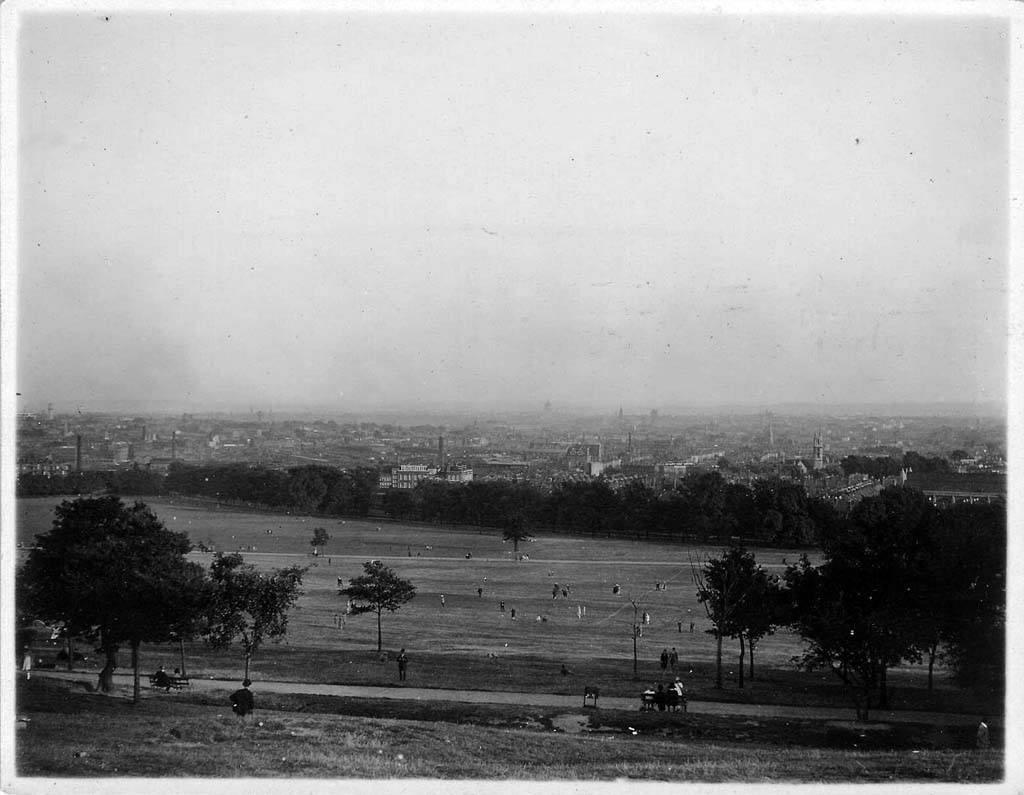 The City of London Corporation have been tweeting some powerful images lately (@CityCorpHeath) including the above pic taken from Parliament Hill. A vista so familiar to all, it appears strangely low rise in this snapshot from 1929.

Following our previous celluloid sighting of St. Paul’s Cathedral’s brief relocation to NW5, here we see quite the opposite effect. It’s as if today’s thrusting glass and steel dominated skyline has just melted away. The Gherkin, Cheesegrater and Shard erased, while the brick chimney stacks of lost local industry scatter the landscape instead.

St. Paul’s is safely in the right place, as are all the local church spires and the Cally Park clock tower, the eight decades of architectural heritage to come – ever twisting the landscape via war, shifting industrial fortunes and heavy-handed town planning – feeling very recent.

The image hit the social media feeds thanks to Michael Hammerson, author of the new book Highgate From Old Photographs. He’s currently working on a follow-up based around a recently unearthed collection of shots from of the Heath from the 1880s.

Kite Hill, as it’s known in the cheery Heath-goers vernacular, or Traitor’s Hill, its moniker a few hundred years before, picked up its official name in the 17th century after being defended during the English Civil War by troops loyal to Parliament.

The spot is also supposed to be where Guy Fawkes planned to watch Parliament go boom on 5th November 1605. Though his plot failed, he’d be heartened to know it remains a great spot for watching the fireworks and ceremonial burnings of his effigy every year on the very same date.

As recently as the 1940s, sheep could be found grazing the slopes here, before being herded down into the City for sale at Smithfields meat market. And as the aerial picture from 1920 reveals, the fields towards Highgate Ponds, now such great winter tobogganing runs, were once home to thousands of small allotments. These proved hugely valuable during WWII and were only removed once the food supply was more stable.

Meanwhile over the other side of the hill, it wasn’t until the late 30s that the iconic – and now Grade II listed – Lido and its neighbouring municipal running track carved their way through the modern view from the top.

Yet despite these relatively rapid and dramatic changes to the look, feel and use of the Hill, the greatest shift of all has taken place in the last few years. Cast an eye at the metal plaque at the top, placed there in 1984.

None of today’s most dominant structures are present on the map, from the arc of the London Eye (2000) to the cluster of towers at Canary Wharf (1991-2003), the hulking great wink of the Emirates Stadium (2006) or the rollercoaster curves of the ArcelorMittal Orbit (2012) beyond.

It all makes the BT – or Post Office – Tower (1965) and Bacton tower block (1971) in Gospel Oak feel very ancient. And yet these seemingly permanent changes to the view from Parli Hill may be anything but. Shockingly, the brand new Shard (2013) has been rumoured to have a lifespan as short as 60 years.

This is to be our view, but it will certainly not be the only view. Despite the unchanging beauty that Hampstead Heath preserves in this ancient lookout, the shape of the city laid out in front continues to shift. A living, breathing entity. When viewed collectively, the buildings display characteristics beyond the bold statements intended by their architects.

Witness the Shard’s cathedral-like point glowing a perfect orange from this angle at dusk, or the jaunty cartoon lines of the walkie talkie building (to be completed in 2014), currently undergoing work to stop its concave shape focusing sunlight and sending parked cars and buildings up in flames.

Guy Fawkes would be proud. This remains the view to make any Londoner proud.

UPDATE: A great Instagram style pic of the view then and now