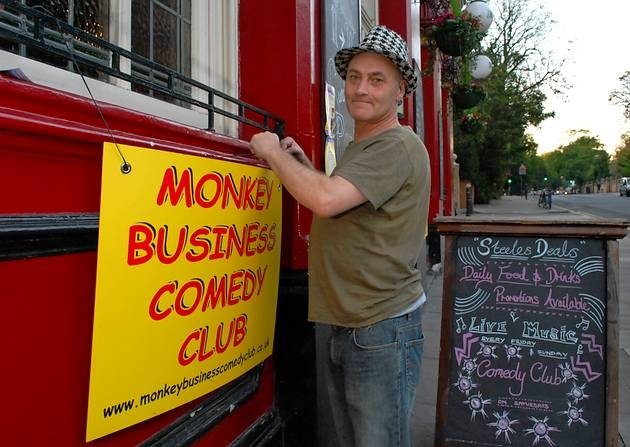 With autumn round the corner, laughter is - of course - the best medicine. So which north London spots will get you LOL-ing the hardest?

Hoot N’Annie’s is our wildcard entry. The ever-changing bar has had a comedy face-lift, and they’re going all out, from open mic nights to comedy lessons. We will be having a stab at comedy classes as soon as the next opportunity arises but in the meantime try their weekly Wednesday night, Funny Feckers, if only for the Irish charmer of an MC, Wes Dalton, who has likability and cheekiness down to a tee. The line-up is a diverse roulette of acts – always good for excitement levels. The food is pretty good there too, so get down early and have a nibble and a Camden Pale Ale. FREE, 180 Kentish Town Road, London, NW5 2AE

TNT comedy night at the Torriano Kentish Town is small but brilliant. You’re crammed into a den of comedy, so much so that when the person next to you shakes with laughter there’s little choice but to join in. It is a regular’s dream since the acts all seem to know each other and they make every effort to get to know you (in the most humiliatingly of ways possible, of course). There are usually at least fifteen acts in this family mothered by the fantastic Sarma Woolf. With a diverse array of music, props, characters and humour there will always be something to like, including the interval raffle because you just can’t beat a raffle. FREE, 71-73 Torriano Avenue, Kentish Town, London, NW5 2SG

The Invisible Dot used to reside hidden away in the middle of Camden Market but has since moved to King’s Cross and is not so invisible anymore. It is the new material and preview hub of established comedians; Tim Key, Stewart Lee, Mark Watson, Simon Amstell and, my personal favourite, The Horne Section. The venue feels like it has a real community and thrives off a particular brand of clever comedy. I never leave the Invisible Dot without the sense that I have just been amongst the first to see something that is going to be big. £6-£10, 2 Northdown Street, N1 9BG London

The Good Ship has a very impressive knack for getting the best headliners. In recent times Doc Brown played to his home crowd and Abandoman’s improvised reinvention of hip-hop turned the Good Ship into a stadium. If you haven’t seen them yet, do it now. Last week all the rage social commentator and comedian Ian Stone was top of the bill, his style of accessible observational humour propelling him into the spotlight. Six comedians for £4. Bargain. The beer is cheap too. £4, 289 Kilburn High Road, London, NW6 7JR

Monkey Business Comedy is a comedic institution. Currently hitting a double whammy on the circuit, setting up camp on Thursday nights in Kentish Town’s The Oxford and Saturdays at The Sir Richard Steele in Chalk Farm. It is as popular with the acts as it is with the audience. I don’t want to point any fingers as to the success of Monkey Business but MC and organiser, the slightly off key yet much loved Martin Besserman, might have something to do with it. His track record in booking acts is awe worthy (check it out). He makes a point of splitting the bill equally between established and new acts because everyone needs a chance to get that big break. £11, 256 Kentish Town Road, London, NW5 2AA & The Sir Richard Steele, 97 Haverstock Hill, London, NW3 4RL