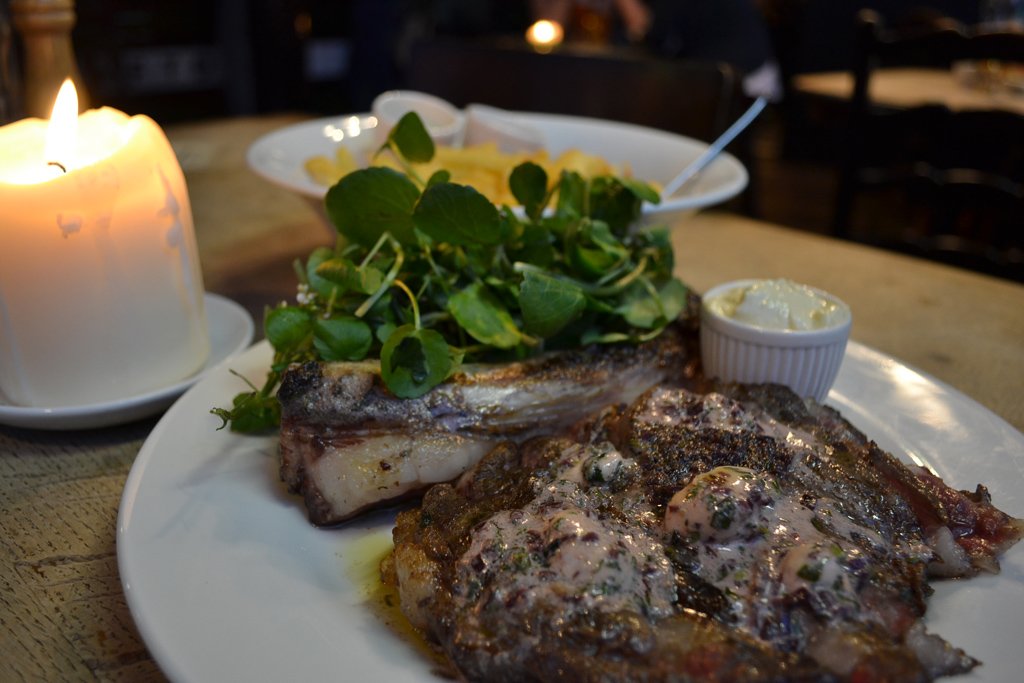 Let us start, if we may, with a potted history. One year ago a young couple reopened a pub on the site of what some bloke from CAMRA called a “dump”. Rammed every night, the refreshed boozer scooped an embarrassing number of our Reader 2012 Awards (including Best Customer Service and Best New Opening), installed a hipster pop-up Lucky Chip upstairs, and then won over the local community with arty nights, singsongs around the piano and festival pop-ups. And yet now, twelve months on, are we seeing signs of maturity with new resident the Fat Butcher? The meaty man in question is Will Dee (nephew to morose funnyman Jack), a chef who’s done time at the St John in Clerkenwell and Stockwell’s Canton Arms, a pub as garlanded as the Bull & Last, the two often neck and neck in lists of Top 50 UK Pubs.

Anyway, he’s teamed up with his pal Julia Finnimore – who does a very friendly front of house job – after they met in New Zealand. Well, it beats mysinglefriend.com. Then again, who says they’re an item?

The Fat Butcher’s ethos is “respect for everything we serve”, from the sourcing of fruit ‘n’ veg to meat and fish. “We like to keep it traditional and buy in the whole animal,” Will says. “It’s a tragedy to have a herd of cows slaughtered for their fillets.” With that in mind, the squeamish might wish to brace themselves for an innard or two popping up in one dish or another.

Find out more about video ads for your business
We’ve been a couple of times in the last week, once on an invite and – just to double check our verdict – unannounced last night, several friends in tow, the pub heaving. And both times we’ve been impressed.

So what do we recommend? A perfectly saline oyster or two; sweet cucumbers with mint and a spicy oil (the simple things sometimes work best); sloppy, drippy brown crab on toast. And some wonderful salt hake (an English Channel resident, lest we forget), its light broth of sweet Sicilian Datterini tomatoes, white beans and dill almost sighing at the late summer.

But the must-try dish? Why, a rabbit caesar salad (£12). In fact, crammed round a bench outside, three of us scoffed this harmonious mound of anchovies, parmigiano, garlic and the tenderest bunny (not stringy, dry or tough in the slightest), its little flavour bombs of salty croutons exploding on the tongue. The plates? Practically licked clean.

The only dud? A less “bun”derful Kentucky Fried Rabbit. A nice idea, for sure – and nod to the previous posh fast food residents – but these breadcrumbed leggy lollipops were too sinewy and bony to offer much pleasure. Still, as Julia says, they don’t like to waste any part of the animal. And what do we know? Apparently the snack is selling out every night.

Finally, a word on the house special: medium rare rib of beef, sliced ready to share. Pick a weight and pay accordingly; ours was about 600g, costing £30 between two (but you could go smaller or larger according to appetite). The light butter sauce – with shallots, garlic, tarragon – was like an eggless bearnaise, the meat rested and seasoned, each bite bursting with ripe, beefy juiciness. An accompaniment? Home-made oak-smoked tomato sauce, the kick of horse-radish, and chips first steamed then twice fried. Oh, and a decent Malbec too (£23 a bottle). You know what? This was nearly Hawkswmoor territory.

And while we’re not massive desert people, we secretly quite enjoy the current vogue for re-imagined childhood treats, and a huge bowl of deeply chocolate caramel with hazelnut – like a squished giant’s Rolo – didn’t disappoint.

Bunny-pops aside, are there any blips? Well, the pricing seems fair for food of this quality, with lunches around £6.50, large plates from £11. Last night, for example, four of us ordered mains and a bottle of house red, our bill £64 (or just £16 a head). And yet does this level of ambition sit comfortably with an already hugely busy pub? We hope so; it’s early days, of course, so how the new chapter pans out remains to be seen.

One thing’s for sure: we reckon The Grafton and their knife-wielding Fat Butcher may have finally slaughtered the fad for the pub burger pop-up . And good luck to ’em.