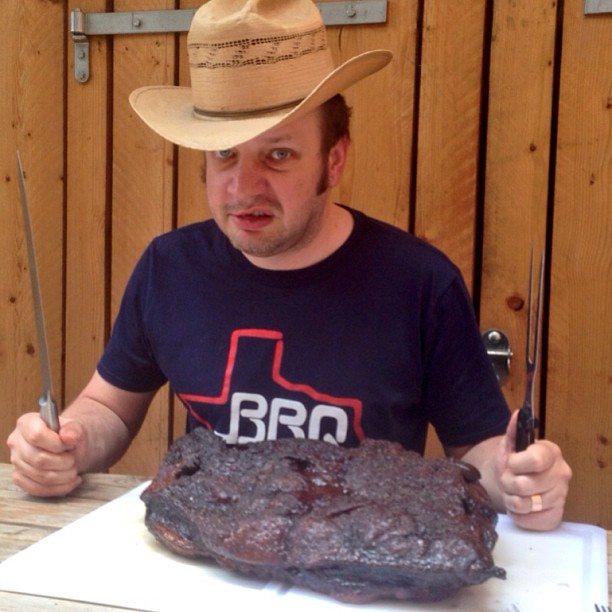 Did you see Texan Kentish Town boy Joe Walters woo those tricksy Dragons in the Den last night on BBC2? If you missed the backstory, we spoke to him last week just before his appearance.

So what went down? Walters, who owns the fledgling Original Jerky brand, and local band Kitty, Daisy and Lewis,  performed their ditty, entitled Put the Jerky in your Mouth (above), to the five initially amused/bored millionaires. And guess what? Joe proceeded to win over all of them, offering a 16% stake of his business at a “snip” – £37,000.

“The last nine months I’ve been researching,” he said to the Dragons, “and then my local craft beer bar [Camden Town Brewery]  started stocking it exclusively. It’s a healthy natural snack and at the moment one company in the UK controls 90% of a market worth £12 million.” He continued to explain that before the jerky idea he was an actor in LA for many years doing big brand commercials.

As usual the Dragons asked a mix of astute and pointless questions. “I think it’s great actually, I love the taste of it,” said interior designer Kelly Hoppen, before adding, “are you really focused on what you want?” Er, we reckon he is, Kels.

Resplendent in a Rhinestone outfit, stitched by the guy who made clothes for Elvis (no expense spared then?), Joe entertained the Dragons in his sartorial choice. “Do you walk down Camden High Street dressed like that?” asked Peter Jones.

“No, but I do walk down Kentish Town Road dressed like this,” said Joe straight back at him.

Cue brand new Dragon Piers Linney playing the “local” card. “I live equidistant between Camden And Kentish Town so that’s handy, he said hopefully. “We can shoot the breeze, we can stroll down Kentish Town Road.”

But while Hoppen, Deborah Meaden and Linney all made acceptable offers, Peter Jones rode in with a demand for a greater 24% equity, but promised to invest a mighty £50K. And it was he who walked away with the deal.

So what happens next? “Over the coming months,” Joe says, “we’ll be adding other jerky flavours, introducing our BBQ sauces, opening a Shoreditch restaurant and spreading the meaty word all over London via our pop-up BBQ.”

Good luck to him. Don’t forget Joe’s cooking up a BBQ storm this Saturday at the Brewery’s Tank Party. And watch the show in full here (skip to 43:01 to see Joe’s slot).