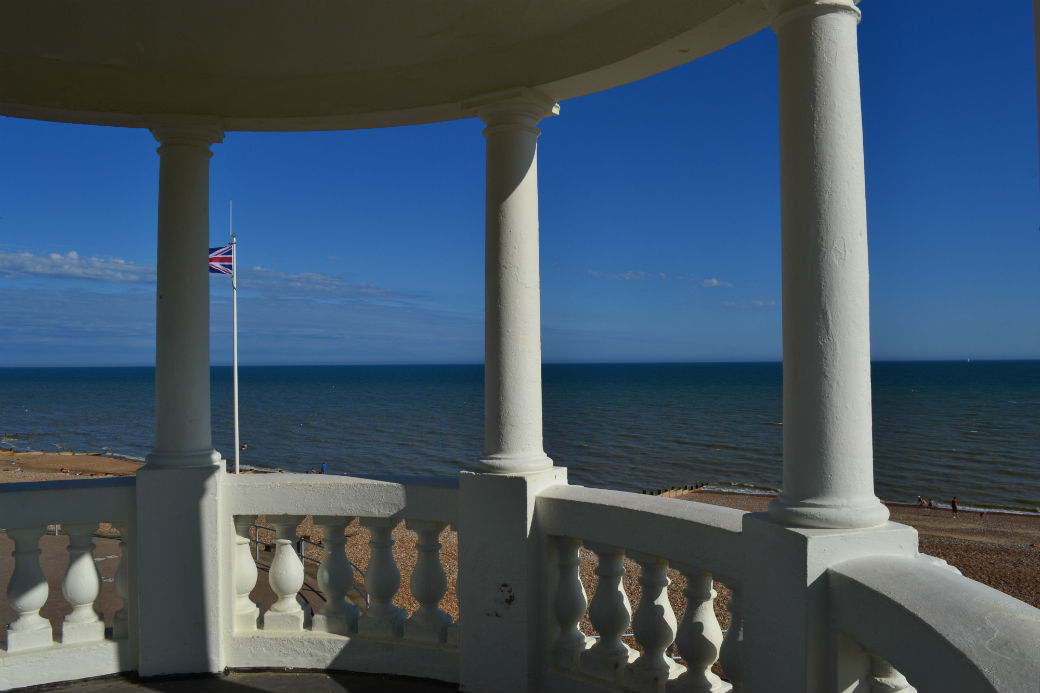 If life is all about juxtaposition, then nowhere is this more apparent than sleepy Bexhill-on-Sea. An ancient old town with purpose-built Victorian resort.  A quiet place with a loud art gallery. Very English, but with a touch of the continentals. And, fittingly enough, the home of Keane, a band who even named a single after its Sovereign Light Cafe on the seafront.

Bexhill-on-Sea was built mostly in the late 19th century as a health-giving resort popular with tourists by the 1890s. It’s the waterfront sister to a settlement a mile or so uphill dating back to the eighth century and awash with clapperboarded buildings, some medieval.

Somewhat unkindly now known as God’s Waiting Room, Bexhill boasts apparently the highest percentage of centenarians for its population in England and Wales.

But let’s face it, that seafront – with its masts clinking in the breeze – is to die for. There’s the atmospheric Colonnade, all artisan shops and cafes; water fountains filled with the shriek of little kids; and a recently landscaped promenade, entitled Next Wave. And you can stop to admire the view over the distant bulk of Beachy Head, or one of the gardens of the privileged that lick the shingle beach.

The De La Warr Pavilion is the reason for many visits. A vast ship-like building in the art deco style – and one of the first major modernist public buildings in Britain – it was constructed in 1935, designed by the architects Erich Mendelsohn and Serge Chermayeff, winners of a competition thrown by mayor and socialist Herbrand Sackville, the 9th Earl De La Warr.

Suffering in the war, the Pavilion declined until the mid 1980s when it was Grade I listed, preventing further damage; but it wasn’t until 2002 that a £6 million grant by the Heritage Lottery facilitated its re-opening in 2006 as one of the south coast’s largest contemporary art spaces and cafes.

Architecturally it’s a dream; in fact, everything about the De La Warr is successful. Current show The Universal Addressability of Dumb Things, curated by Turner Prize-winning artist Mark Leckey (which runs till October) is astonishingly uncompromising, while also adopting essentially a cabinet-of-curiosities approach in its juxtaposition of objects throughout the ages.

Purporting to explore the “magical world of new technology as well as trace its connections to the beliefs of our distant past” it’s a stark and effective look at the real alongside the unreal: artefacts mingle with videos, machines with paintings, TVs with reliquaries, in a busy theatre of things.

The sum is greater than its parts, the “dumb things” surprisingly communicative both with each other and the audience (we particularly liked the throb of Leckey’s own “Soundsystem”). Each of four rooms darkens the theme, the final one black lit and full of horror, comedic and otherwise, with its mix of works by Louise Bourgeois, Aphex twin and William Blake.

Still, edgy gallery aside, what’s the food like about town? For lunch, the De La Warr cafe is in prime position, with its direct sea views and modern light menu. Elsewhere, decent grub is to be found at Bistro 45 and Thai restaurant Sawisidee, while The Italian Way on the marina has lots of alfresco tables and a buzzy air. We ate at the most popular restaurant on the corner of the seafront, Trattoria Italiana, newly extended that day and packed to the rafters with a mixed all-ages crowd. The menu? Think perfectly ripe avocado and fishy prawns, bruschetta that spills off the toast on the way from plate to mouth. A saltimbocca romana main (parma ham, sage and veal) wasn’t bad, if unmemorable. Liver and bacon was better; chargrilled seabass with cream and brandy a little overwrought. Service had a tendency to treat diners like they’ve never been to a restaurant before. 64 Devonshire Road. Mains around £13.

Start at the colonnade in front of the De La Warr, with its various craft shops and cafes, then potter round the many indie bookshops, interiors/gifts and second hand shops like Sweet Pea, No.48, Music’s Not Dead and Nostalgic Vintage. Also don’t miss Eras of Style (Terminus Road).

Climb up to the old town to see the Bexhill Stone in the hill-top church, and gawp at the clapperboard houses; or try the motoring “heritage” trail (a 4 mile walk guided by seafront panels). We took a five mile seafront amble over to St Leonard’s and the new Jerwood in Hastings (another mile or so), an easy wander with gentle rolling cliffs and miles of flat path.

Try the Towner at Eastbourne, which opened in its present space in 2009: architectural sculptures in main space, People and Portraits show upstairs is well curated. The town is a pleasant enough diversion, especially the Little Chelsea and seafront areas.

We stayed at Buenos Aires Guest House, an attractive Victorian semi dating back to 1894 run by a friendly, chatty couple. The rooms were homely with touches of luxury – a four poster, a decent shower. Gulls shrieked all night as they had “babies they’re protecting”, explained co-owner Rachel next day. Breakfast was good: smoked salmon packed with flavour, scrambled eggs velvety, a full English devoured in minutes. Overall a simple blend of comfort, humility, cosiness. More info here. 24 Albany Road Bexhill on Sea. Doubles from £55.

This is box title
Getting There: Take a train from Victoria, about 1 hour 40, costing around £35 return on Southern Railway. Intrigued by the De La Warr Pavilion? More info here.