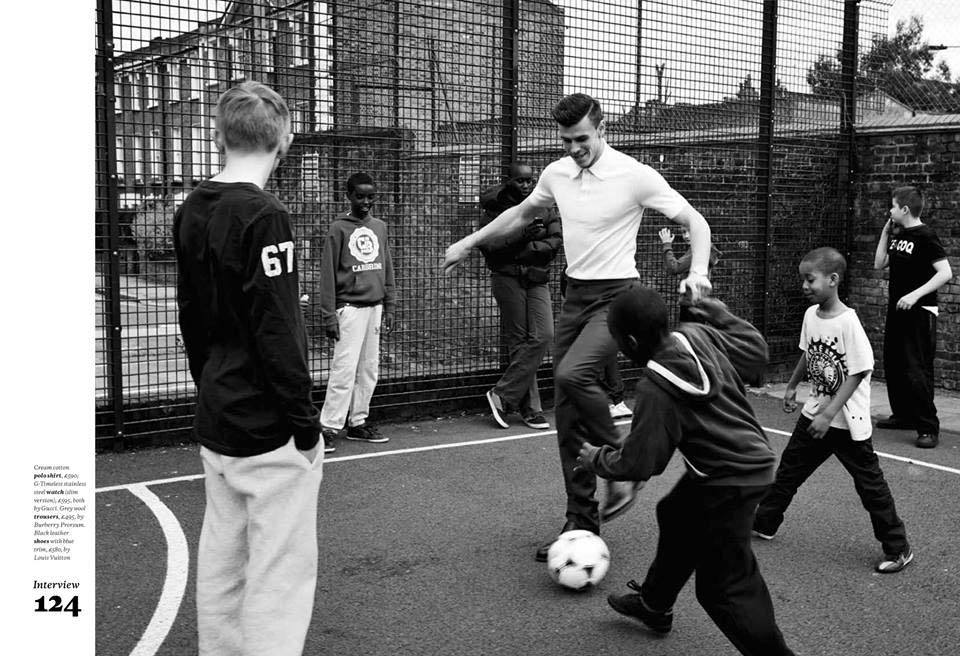 Football-loving Kentishtowners may have noticed that the cover star of Esquire Magazine’s August issue is superstar footballer Gareth Bale – and the location for his photo shoot, none other than Holmes Rd and Spring Place.

Sporting times have changed. Bale’s photoshoot was styled to reference a lost era where top players did live and socialise within their local communities, in amongst their team’s fan-base.

In reality, Bale spent half of July with his club, Tottenham Hotspur, at a pre-season tournament in Hong Kong, and most Premier League sides are now likely to abandon their traditional, local fans every summer for a pre-season jaunt to the Far East or America.

The irony is that while top players exist in the rarefied world of elite professional sport, the Premier League is now able to leverage vast pots of TV money to deliver some outstanding community development work across England. The global popularity of the game has led to that local-level work being shared across more than twenty countries in Africa, Asia, and Latin America.

But what about the actual football? North London’s annual pre-season sagas of whether Spurs or the Gunners will sell their best players, or finally find something to do with that spare room in the Emirates, distract from the fact that once the season kicks off, the basic pleasure that millions get from supporting their Premier League Club is now almost exclusively to be enjoyed via a screen.

So we think it’s important to promote the alternative. This season we’ll be bringing you the story of real football that remains at the heart of our community, and – listen up Tottenham and Arsenal fans – there are likely to be real trophies at the end of it.

Kentish Town Youth FC was founded in 2009 and has over a hundred players on the books in boys and girls teams, from under-sevens to under 14. Set up by professional coach TJ O’Leary, KTFC is non-profit, and aims to offer training sessions to young people from low income families who may not be able to afford to sign up to other local football clubs.

They have built up relationships with a number of professional football clubs, which include Arsenal, Chelsea, Brentford, Watford, Stevenage and Leyton Orient. Late last year a KTFC U13 signed a professional contract with Watford FC, and they currently have three other players on trial at Brentford and Stevenage.

For every Gareth Bale, there will be hundreds of great players told they’re not good enough at 18, thousands let go at 16, and even more children rejected by clubs around the country earlier than that. Getting to the top of football is so, so, hard, but our media’s obsession is focused only at the very peak of the mountain, ignoring not just the path of ascent, but the landscape around it.

So we would like to bring our local club and its equally compelling human stories in to view. Why does this matter? Because few things can create a better sense of community and understanding than supporting a cause, and little has captured our country’s shared imagination more than kicking a ball around.

Of course, community isn’t tied to locality. Just as there’s a myth that in London you’re never more than six feet away from a rat, you’re probably never further than 20ft from a Man Utd fan. We believe that Kentish Town Youth FC is an equally great example of community success.

Teams are winning cups every year, so the story of their season provides an insight into a cut-throat competitive world. It should give all of us who care about our area and our football another focus, away from the global sporting Goliaths. And above all, it’s a chance to get behind our local kids as they play for pride and the love of the game. Go Kentish Town!

The 2013/14 season kicks off in a couple of weeks. Check Young Kentishtowner for regular reports on the highs and lows of trying to win a cup and maybe even become a future Gareth Bale.

Behind the scenes at that Esquire Magazine photoshoot – play the video for more Kentish Town locations with a well known footballer in front of them.