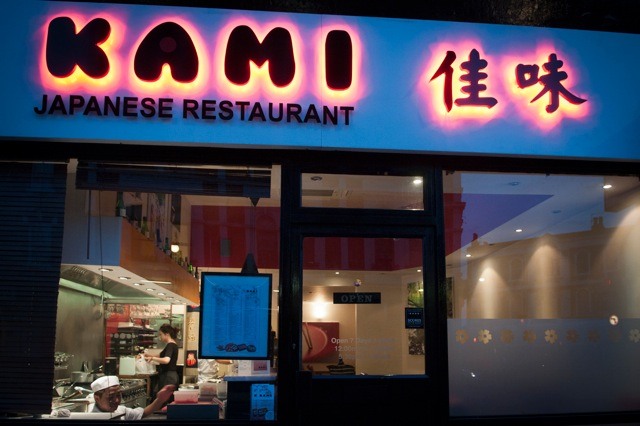 Satuma in central K-Town has been reborn as Kami under the helm of former Sushi Samba chef Kenneth Kim. So is this new incarnation a real contender? Kelly Hill reports

My children love Japanese food and we regularly visited Satuma. In fact, we’ve always been rather fond of the odd couple that ran the restaurant and the slightly slow and chaotic service.

We were therefore surprised, and a little alarmed, to discover it had undergone a face-lift. For those unfamiliar with the brilliant animé films by Hayao Miyazaki and the sublime Spirited Away, Kami are spirits or phenomena worshipped in the religion of Shinto, elements of nature, animals, and creative forces in the universe. We were therefore intrigued to discover what had spirited the previous owners away – and what had been re-imagined in their place.

The new incumbent, Kenneth Kim, is a sushi chef with a perfectionist streak who has learnt his trade at Sushi Samba in the Heron Tower, Tsukiji Sushi, The Westbury Hotel, and Ozu Zen Cuisine on the South Bank. With such central locations behind him one can only hope that his presence on the Fortess Road is yet another sign that Kentish Town is on the brink of a renaissance.

So we ordered a take away last Monday. The food arrived swiftly, beautifully packaged and neatly presented. The one cloud, on what was an otherwise perfect supper for four (£33.20 with their current 20% discount) was that the miso soup had leaked over the nasu dengaku (aubergine in sweet miso): soup is not an easy thing to deliver, hot and in one container. And while it was delicious (we are quite fussy, I should add), it was a great shame the majority of it ended up at the bottom of the bag.

Find out more about video ads for your business
My kids tucked in to the chicken and vegetable gyoza, maki rolls and salmon teriyaki, all carefully prepared. I opted for the chirashi zushi – my favorite dish at Satuma: good, but with this dish I missed the diced fish as served by the previous chef, a delicious staple that hit the mark every time.

We returned for more on Friday and were pleased to see a steady stream of orders being exquisitely dispatched. This time round we tried the meltingly soft yasai tempura while the kids slurped happily at the chicken soba (a generous bowl for £7). More spectacular still was a dragon roll – filled with prawn tempura, eel, avocado, cucumber, spring onion and tobiko – which looks like art and is prepared with craft and care.

A downside? It’s a shame that the restaurant lacks atmosphere, but the food more than makes up for it.

In January, the Kentishtowner awarded Satuma a 6/10, observing that the owners might well be missing a trick, and that tweaks in the offering and better pricing would be relatively straightforward, potentially making all the difference to the survival of an independent Japanese on our high street.

It’s early days, and the place is having a few birthing issues, but I suspect that Kenneth Kim will bring an imaginative twist to the tried and tested formula of the sushi restaurant.

In fact, Kami just might be the contender of which we were all dreaming at the start of the year.

Kelly Hill is a photographer. See more of her work here.