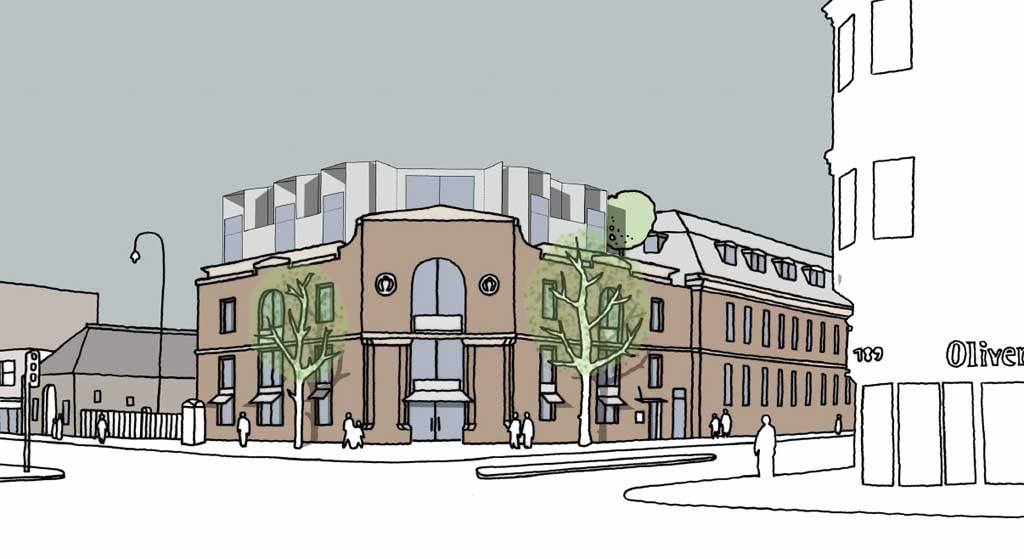 Last night dozens of Kentishtowners crammed around the unveiling by architects Allies & Morrison of the latest plans for the iconic former Pizza Express building, which dates back to 1929. It’s no surprise that it’s such a hot topic, after much discussion underneath our many articles.

First impressions? The history of the building and proposed plans were laid out quite clearly (although the finer points were still a little fuzzy), with the architects, who also did the original residential conversion of 1 Prince Of Wales Road, keen to engage opinion.

Unlike the previous much-derided plans for the building, these latest proposals leave the much-loved facade in tact, but they do add twelve swanky apartments (mostly two bed) in a two storey block on top. And it’s this rooftop addition “set back from the existing facade and sensitively designed” that may prove controversial amongst the building’s campaigners.

The ground floor will be preserved in its historic function as a “congregational” space, promised director Artur Carulla, who also assured concerned locals that it won’t be a club or pub. Our view is that a cinema or arts space seems unlikely, however, due to both commercial reasons and the way the space is being carved up. We reckon it’ll be a restaurant or shop, inevitably.

And the mood? One of cautious approval, with some residents concerned about too much noise, the new windows being leaded in the same style, the scale of the extension. “My personal view is that they’ve made a genuine effort at consultation here,” said John Nicholson of the Inkerman Conservation Area, who also helps organise the popular Alma Street Fair: “I quite like the overall design but have some concerns about height and bulk of extra floors on building. I’d like to see ground floor as flexible small units capable of multi use eg workshop units, small retail, craft stalls and not some retail chain.”

But retail chain or not, the overhaul is set to take a minimum of eighteen months, with the opening right into early 2015.

So what on earth can us Kentishtowners do with the building for the many months until work starts? How about that temporary arts space, market or gallery after all?

What did you think of the proposals?