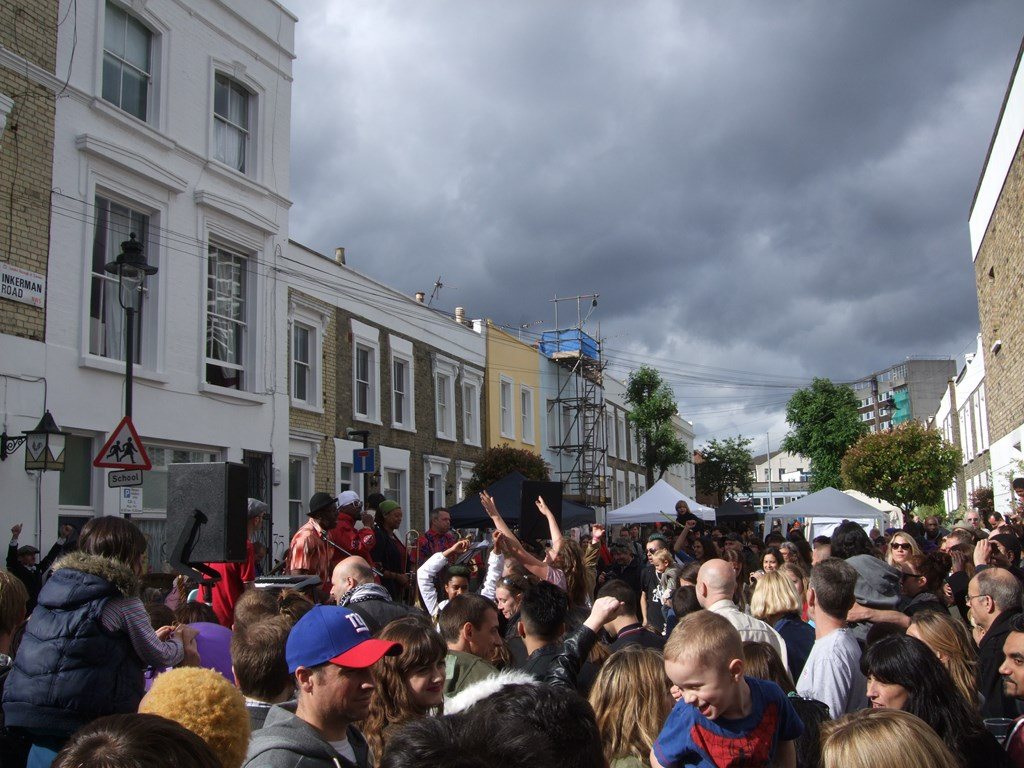 Despite the grey skies, thousands descended on the Inkerman Conservation Area yesterday for the annual celebration of Kentish Town's creativity and diversity

Well, unbroken sunshine it wasn’t. And then there was the sometimes howling wind that ripped through the gazebos and canopies, even sending the Grafton’s spinning into the air at one early point.

But still: what a day! And my word, how you lot came out in force. Officially, a few hundred; unofficially thousands.

While it was a different experience this year for us, working on our stall rather than boozing and hanging out, it was equally – if not more – memorable. Right in the middle of Inkerman Road, our neighbours The Fields Beneath, Harry’s BBQ and The Grafton, we were poised between the two main stages, meaning most of the day was soundtracked by a weird mash-up of reggae, dub, blues, dance and indie rock.

We managed to sneak away a couple of times, spying Whiskey Mick, the brilliantly named Acid Horse and of course Jay-Z’s bezzie Mr Hudson at the end, on stage with Mario (from Mario’s Cafe) and a host of others including sax player and trombonist. And we’ll never tire of those festival staples Supernova and Forever Young: what is it about the latter’s lyrics that always resound with the crowd, whatever their ages? Even more so under leaden skies.

Find out more about video ads for your business
On the food front, we scoffed mightily. Things we enjoyed? The baps at Phileas Hogg (about to take over from the departing Farmer Tom at The Abbey pub) – pulled pork and a very tender salt beef with slaw were deliciously succulent. We tasted the lime and dark chocolate cheesecake from Flour of London, our very own Patisserie Diarist Clare Zerny’s new brand (also stocked at Fields Beneath daily). And there was more than a cupcake or two, plus oysters and ale from the Grafton (though not all at the same time). What else? Associate editor Louisa Saunders from The Independent was raving about the falafels at Hoxton Beach. And co-editor Tom, on different occasions, scoffed a £1 slice of pizza from Delicious, and a wrap bursting with everything from chilli to apple at Arancini Brothers. Throughout the day we eyed up Ruby Violet’s ice cream van enviously, its queue of sweet-toothed punters snaking down the street.

For those who wanted to pick up an artisan or secondhand gift, there were more quirky stalls than ever, from the usual home-owners’ displays of books and bric-a-brac on tables to Scratchline Tattoos, doing a fast trade in kiddie transfers.

Then there was Melissa Hardwick’s Art Street, a workshop run by the Zabludowicz Gallery, the official Alma Street t-shirts from Fifth Column – and, of course, vats of beer from the neighbouring Camden Town Brewery. Or maybe you were too busy tucking into the cocktails from Flaxon Ptootch? Sadly, we missed Michael’s acoustic performance…

And reader Mary Carson emailed us this great pic by face painter Jasmin Walsh, hanging out just near Map Cafe on the corner. Formerly “chief facepainter in Kentish Town”, she says, “Jasmin is now living in Brazil, and was there yesterday for the first time in two years.”

And finally, a mention must go to the hundreds of readers, who kindly came to say hello to us at our stall.

We are truly chuffed that that our new range of merchandise was such a success: we’d nearly sold out of T shirts and tote bags by the end of the day.

So ta to everyone who helped support us – and we hope to see you wearing them proudly around town!

Afterwards, stall dismantled, we joined hundreds of others at The Grafton, as the after-festival spilled out on to the street with various cool young things as a full live band belted it out inside. A fitting end to a truly special day, so thanks to all involved (see pic right) in this annual event’s ever-growing production.

It goes without saying that this is by no means a comprehensive report as we were flat out serving customers all day.

So if you were there, tell us below your highlights. Which other bands rocked it? What was the best thing you ate? Who else deserves a mention?

Loved Alma Street? Pick up one of Merlin Evans’ limited edition Spirit Of Alma signed prints from our online shop, where you can also find Sian Pattenden’s Cultural maps and our new t-shirts and tote bags.