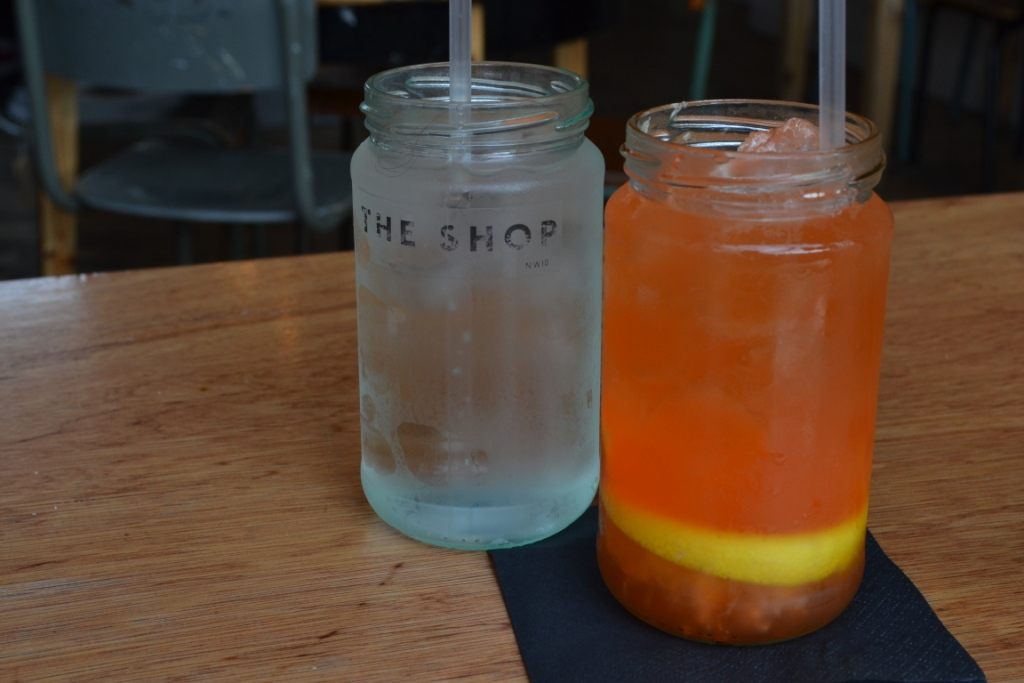 A few years back, the editor of Vogue declared Kensal Rise’s Chamberlayne Road – where she of course lived – as the “hippest street in Europe.” That’s quite a claim for what is a rather plain stretch leading down from the now nifty overground; it would, of course, be similarly erroneous to declare Kentish Town as such.

Anyway, we’ve said it before but one thing we love about living in our patch of north London is accessibility. It’s 15 minutes to Hackney, and about the same to quirky places like Kensal Rise westwards. We, of course, like to walk, Jack Russell in tow, and so set out on the three mile stroll just as the sun was breaking through the clouds on a warmish Saturday morning.

Leaving NW5, we passed along England’s Lane and, at Swiss Cottage, the buzzy little weekend market outside Hampstead Theatre. We actually paused to admire the revamped IMAX cinema, too – a splendid thirties building, in fact.

Our mobile GPS mis-advised us (scenically-speaking, anyway) and it was a bit of a drudge along Belsize Road to Kilburn (itself the subject of a future Free Weekend, don’t fear). Yet just over an hour after setting off, we had left behind villagey Queen’s Park, and were already at the junction of hipsterish Chamberlayne Road.

Like Kingsland Road, Mare Street or Kentish Town Road it’s an unprepossessing strip at first glance: gently sloping, traffic-clogged, the bump of the railway bridge leaking down into Kilburn Lane, a once-bohemian Portobello beyond. For me it has a personal history too, as I used to traipse up and down on my way to record company meetings at Virgin in the late 90s; it was also the site of a proposed off-shoot of Camden Lock Market back in the 70s, as a new book on the subject, published last week, reveals.

We stroll down Chamberlayne Road – now all independent boutiques, the inevitable result of the west London middle classes moving north from Notting Hill – and along the traffic-choked Kilburn Lane to the 72 acre cemetery, inspired by Père Lachaise in Paris. A majestic arch, Grade I-listed tombs, catacombs and war graves, it’s an atmospheric place. Alas, we had the aforementioned pooch in tow, so I could only run in to take these shots for a moment, rather than enjoying a leisurely stroll, but you may remember the place was immortalised in the lines of G. K. Chesterton’s poem, The Rolling English Road: “For there is good news yet to hear and fine things to be seen; Before we go to Paradise by way of Kensal Green.”

The latter phrase is, of course, now the name of one of Kensal’s most famous pubs (from the makers of Camden’s Blues Kitchen people, fact fans) but having been there many times over the years we opted for lunch at the Parlour, an effective revamp of the former Regent pub, owned by the same people as The Stag in Gospel-Belsize. Its interior was rocking a diner-cum-dairy look, all bare wood and tiling, and a not quite needed roaring fire, but it was the perfect spot to sink Bloody Marys (even better with the secret addition here of port) and devour an apparently famous Cow Pie. Dear God, it was the richest lunch we’ve tried for many a moon: a vast disc filled with hearty steak and ale, and a bone marrow centre. We were nearly, but not quite defeated.

After all that, there were calories waiting to be exorcised and so we marched up Chamberlayne Road, the dog scampering behind us, popping in everywhere from Circus Interiors to various flower shops, artisan delis, a very decent butcher’s (Brook’s, right by the station), and a junktique place or two.

It’s a lengthy stretch, so we concluded our roam in a tiny cocktail bar we’d read good things about. The Shop, as it calls itself, is very European in its outlook – mismatched furniture, short cocktail list, all-day brunch menu, a piano in the corner.

In fact it could be somewhere cool in Antwerp, Berlin or Copenhagen. As yummy mummies sipped on coffee in the corner, we sucked on a couple of Aperol spritzes from, er, jam jars as the sun started to pour through the windows, heating the place like a tin can. Though quiet, it was pleasantly laidback, we concluded, and right by the overground, making it only a quarter of an hour from NW5.

And while we don’t venture way out west much, Kensal felt like a worthwhile re-discovery, and quite refreshing if you’re bored of going east or into town.