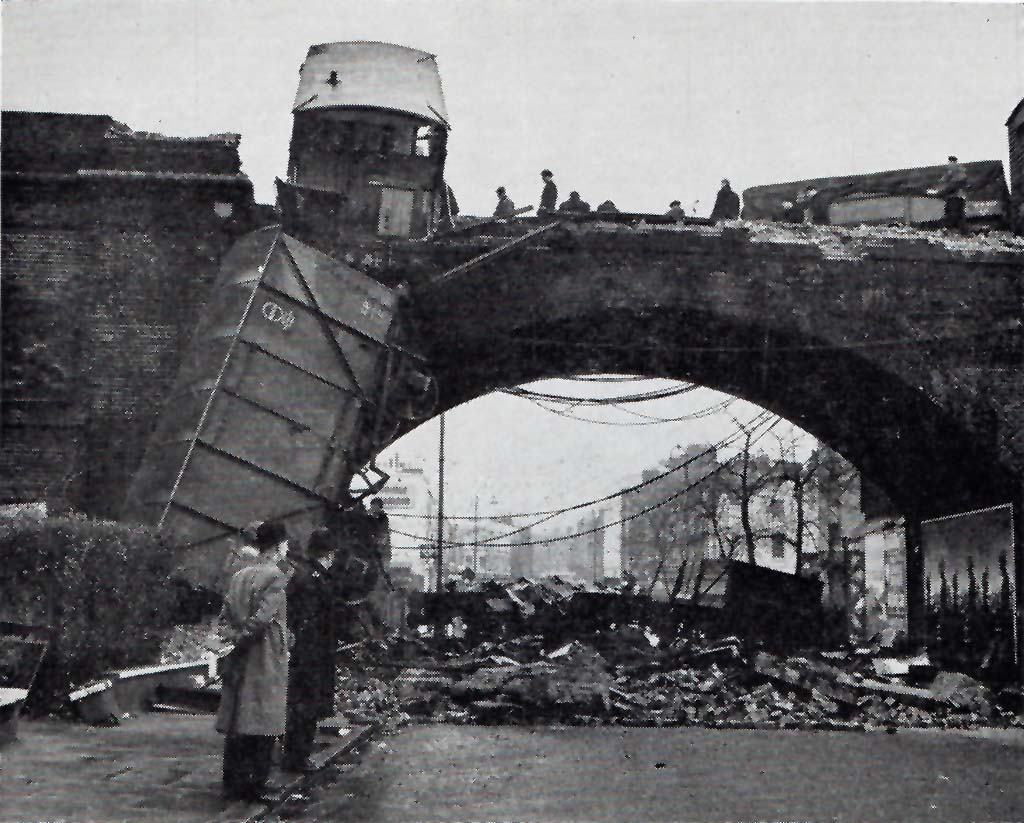 “I came across an old magazine and noticed a photo showing another railway accident in Kentish Town Road in January 1962 with an amazing photo,” he emailed. “No lives lost but lots of damage. They seem to have reinstated trains [to the now vanished Broad Street Station] within two days though. The exact location hasn’t changed much today, next to Camden Gardens, just north of the canal bridge.”

This lesser-known accident makes for an equally dramatic and slightly chilling Wednesday Picture. Just look at the state of the road, let alone the remains of the bridge, which appears to have lost carriages from both sides.

We do like the bowler-hatted gent and traditional bobby, stood respectfully on the kerb, in well-turned-out contemplation. And wouldn’t it be interesting to know what the billboards under the arch were advertising?

It’s pretty safe to assume the cast iron structure that, er, graces the spot today was the eventual replacement, yet in 2013 the bridge is threatened with destruction once again.

Plans for the HS2 rail link include widening the tracks out of Euston, meaning hulking great replacements for historic bridges throughout Camden including this and the one bearing the famous Camden Lock mural, just up the line. The lovely arches of Camden Gardens, gateway to Kentish Town, may be forever altered in a way they haven’t been since, well, January 1962.

And who remembers a bridge prang of another kind, this one dating back only 5 years, from February 2008?

A number 24 bus driver managed to decapitate the top deck roof after skirting a little too close to the bridge at Kentish Town West. Luckily no passengers met quite the same fate as the bus, but there were six hospitalisations and the driver was among those who required treatment for shock.

The reason the 24 was taking this irregular diversion down Prince of Wales Road? The fire that had ripped through Camden Market the previous weekend. It meant Chalk Farm Road was still closed while buildings including the former Caernarvon Castle pub were assessed for structural stability (it was pulled down later that week).

Destruction inadvertently stemming from destruction, rippling up the railway viaduct…the fire itself was followed by a rash of conspiracy theories and doom about the future of Camden.

Now, five years on from the bus crash snapshot, it is interesting to contemplate how much really has changed in the area. The canal market has been rebuilt and thrives as a village of huts and converted moped seats, albeit on dubiously legal grounds. The controversial development of the Stables Market has continued, yet large parts of the more jarringly modern buildings remain strangely empty.

The damaged Hawley Arms was saved, but the pub’s most famous regular, Amy Winehouse – who mentioned the terrible fire in her acceptance speech for Best Record at that year’s Grammy Awards – is herself, sadly no more.

And look at the backdrop to the bus crash. It depicts an era before the welcome Prince of Wales Road resurgence, the recently rebranded overground project having only just begun to replace the “shabby, unreliable, unsafe and overcrowded” (to quote the Mayor’s office at the time) Silverlink North London Line.

The old ticket office building, which now houses acclaimed coffee spot The Fields Beneath, sits boarded up. It stretches right across what is now the start of cobbled Wilkin Street Mews, home of Camden Town Brewery. That whole area had previously been a long-term traveller caravan site, whereas now, the towering and controversial Princes Park development rises up on the rest of the land.

And did you know the 24 bus is about to become one of the first routes to run the new, reimagined Routemasters? London’s travel infrastructure continues to modernise at a rate and ambition – not seen, in fact, since the bridges first went up.

Meanwhile the railway lines, their arches and cuttings, stations and viaducts, weave inexorably through this area’s modern history, shaping our movements and daily rhythms.