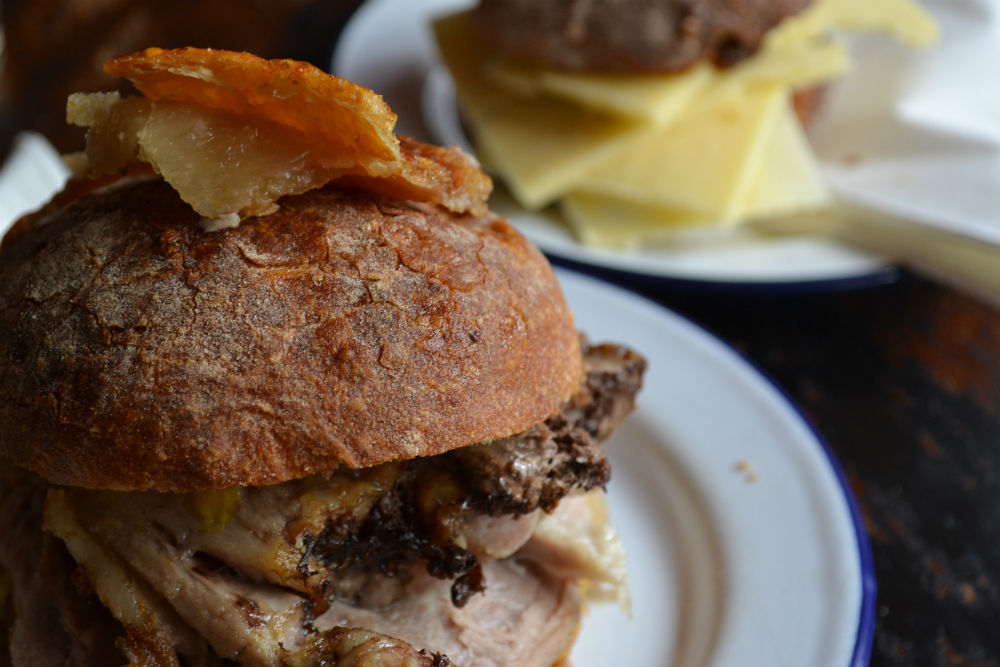 Did the place reinvent the idea of the pub? And, for that matter, the ubiquitous "streetfood" sandwich? Stephen Emms salutes a worthy institution

In theory it’s a hard ask to review the Southampton, a pub we’ve frequented more times than we’ve had, er, pork baps. But its influence across London and beyond means that an appraisal is long overdue.

For the sake of objectivity – and in an attempt to view it with fresh eyes – we decided to visit at a time alien to us: Tuesday lunchtime, the rain torrential beyond the big east-facing window.

Expecting to enjoy the pick of the seating for once, and a quiet corner for our two lively Jack Russells in tow, we were more than a tad surprised that at 1pm every damn seat was taken. A paltry two bar stools remained, in fact. For the love of god! Is there never a quiet moment within these four walls?

Our history with the Southampton goes back to its rebirth nearly five years ago. With its simple, but in retrospect obvious policy of vinyl only, cash only, and rotating ciders and ales, it somehow reinvented the things a lot of people like about pubs.

And after 11 o’clock, if you befriended the sometimes churlish staff, the lock-ins were always lively, a mix of the inebriated, the story-tellers – and those who just didn’t want to go home. We even met the founder of the British Beard Club once (yes, he did try to recruit us). And success, of course, was so swift that it quickly became somewhere that was just “too busy”.

So now, on this rainy Tuesday, let’s take another look around the interior: dark panelling, a long thin sharing table, white tiled back bar, pendant lights, austere Victorian portraits, and much-used piano (if you haven’t seen that in use, head there next Tuesday).

The garden is walled and conspiratorial; regulars will have smiled at the chalked sign urging users to leave by 10pm, “the leopard unleashed at 10.02”. And back inside, it’s always a pleasure contemplating which ale to pick: in fact, there’s something about the pub that encourages a certain libational adventureness. If that is, indeed, a phrase.

Of the ales on offer the other day – things like Redemption’s Trinity, Full Nelson and Chocolate Marble – I tried Ascot Ales’ Big Alligator, refreshing but very potent, and Dark Star’s Revelation: hoppy, citrusy, a full aroma, and packed with flavour (and, at 5.7%, alcohol, no wonder I needed a lie down after). But over the years we’ve sipped ’em all (and worked our way through the mind-altering ciders, to boot).

The food menu has never changed, and probably never should. Eschewing delights like the sausage rolls, Scotch eggs, and the cheese plate, Below The River editor Kate and I shared a pickled egg to start, its lip-smacking vinegariness pairing winningly with the ale. And the baps were, as always, spectacular: warm, fresh, chewy bread crammed with piles of pork with tangy apple sauce and crackling, mustard punching the flavour even higher. Meanwhile, veggie Kate’s cheddar was deeply mature, the pickle fruity. A feast for two (our south London editor drank lime and soda a cheap date) was little more than a tenner. Bargain. And couldn’t you even argue that the Southampton inspired the current London vogue for “street food” pop-ups in old boozers?

Yes, we’re not saying anything new here. It’s won a slew of awards, from CAMRA this and that to hundreds of votes from you lot; and even, quite memorably, a US site awarding it #1 hipster status in London (or something).

But for all the hype, the crowd is mostly low-key and unpretentious: on our Tuesday lunchtime, as an Ella Fitzgerald record crooned (its scratches pleasingly audible), the pub’s well-rounded mature gents were sighing over pints and pork, dogs dozing amicably at muddy shoes.

So does the Southampton Arms work at whatever time of day? No, actually we sometimes get bored of it being too busy. But at least us locals have the option to choose exactly when we pop by. Right?

Find the Southampton Arms at 139 Highgate Road NW5 or on our Nearby map. A good-sized bap is £4 Kentishtowner Rating 9/10