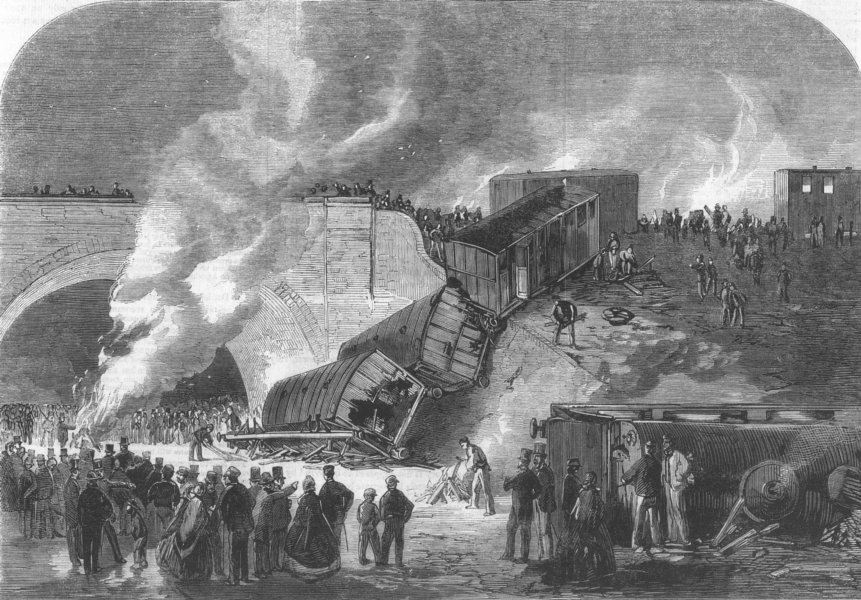 16 dead. 317 injured. 20 seriously. Kentish Town has seen no rail accident like it, before or since

This memorable image appeared in a weekly newspaper, the Illustrated London News, after a major rail crash occurred at Kentish Town on 2 September, 1861.

At just after 7pm, a passenger train on what is now part of the London Overground collided with a freight train, killing at least 16 passengers and derailing the train to such an extent that it left the embankment. The derailed carriages followed and tumbled over the wall into the road below. The resulting carnage was one of London’s first major rail tragedies.

How did it happen? Well, the passenger train from Kew, which was running early, had been given permission to proceed; but met the freight train as it crossed the lines at a freight sidings unprotected by signals.

The person on duty at the time the accident happened was a 19 year old named Raynor, employed on the railway and at Kentish Town station (what we now call Gospel Oak) for about eight months. And there was some dispute, as there often is, over whose fault is was. The regular, more experienced signalman, a man named Fessey, admitted he left work after the 6.35pm train had left. But he also told the inquiry that he warned Raynor, “when the ballast train wants to come out, see that all the four danger signals are up”.

It was concluded after an inquiry that “more experienced signalmen than Raynor should be employed. The safety of the public should not be entrusted to a lad of 19 years of age, paid at the rate of 14s. or 15s. a week”; and that “no excursion or special train should be permitted to run at any other than the appointed time, without a special notice tail-board or extra lamp being sent by the previous regular train..”

The question mark we still have is where exactly on the stretch from Gospel Oak to Kentish Town West the accident happened. It could perhaps have been where the car service garages are under the arches at Arctic Street.

Or, much more likely, as it’s nearer Gospel Station, with its interchange, we think it took place right about here, where sheep now graze at the southeastern tip of the City Farm.

Interested? Read a summary on the next page of the original report from 1861.