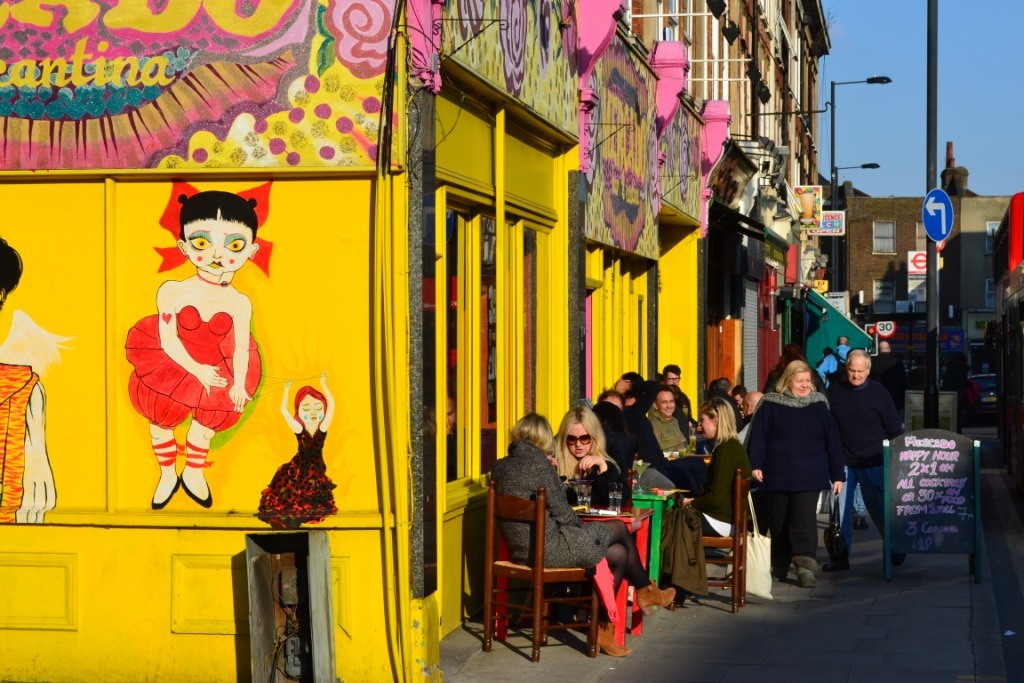 It’s a genuine wow moment: rundown, boarded up and the perfect setting for horror films”

So it’s a sunny late spring morning, the Heath looks inviting, but you want an adventure. Ever thought about the 393 bus? Probably not (and I really don’t blame you). A Kentishtowner doesn’t need to venture deeper into North London, but let’s give Stoke Newington N16, the destination of the 393, a go.

After all, it’s where the bloke and I now find ourselves living; originally something of a shock, having lived in the borough of Camden forever – with eight years and two kids in Gospel Oak alone.

OK, so let’s begin our journey (alternatively you can walk it in around 45 mins). As Holloway Road skims by and then leafy Highbury, we reach Clissold Park and the famed “buggyville” village community of Church Street (Stoke Newington does have the highest population of under-fives in Europe). Like NW5, Stoke Newington is a very multicultural area, with large Asian, Irish, Turkish, Jewish and Afro-Caribbean communities, and has long had a distinct, alternative character.

Stokey itself covers a pretty large area of North Hackney, and Church Street, by no means the be-all-and-end-all of things, is a good place to start. So jump off at Bouverie Road and you’re probably in need of brunch and a tipple. But relax Kentishtowners – you’re still in zone 2!

First head to Homa for Eggs Benedict and a glass of champagne. Their focus is organic ingredients, locally sourced where possible, and includes ‘N16 salmon’ courtesy of Stoke Newington based Hansen-Lydersen.

Walk it off in magical Abney Park Cemetery, Europe’s only de-nominational garden graveyard when it opened in 1840, and now one of the Magnificent Seven London cemeteries (as well as being Hackney’s first nature reserve).

Enter through a small gate on Church Street and head toward the centre of the park where the gothic Abney Chapel rises eerily through the dilapidated graves, crawling with ivy. It’s a genuine wow moment: rundown, boarded up and the perfect setting for horror films, magazine shoots and, most notably, Amy Winehouse’s classic Back to Black video.

At the bottom end of Church Street lies vibrant Stoke Newington High Street, which leads straight down to Dalston and provides an ever expanding home to even more independents like Gallo Nero (an atmospheric Italian deli), Mint clothing – perfect for a vintage shirt – and Hung-Up Pictures, which recently moved from Shoreditch up here. A stylish gallery, it exhibits the likes of Banksy and Polly Morgan. “I had always had an affinity with the place,” says owner Ben Cotton, “its bohemian gritty feel.” Potter back up Church Street to have a mooch around the vintage furniture at The Cobbled Yard and The Restoration in Bouverie Mews; seek out a gem at the second hand bookstore and scour the plethora of vintage clothes stores (Strut Man is the current fave of hipsters in need of some vintage Helmut Lang), flower sellers and other independents. You may even spot my bloke whiling away his hours at Lucky Seven, a treasure trove of vinyl, as well as books, DVDs and CDs. And if you’re a Banksy fan, don’t miss the famous mural on the same side of the street.

Now take a rest at one of the lovely cafes on Church Street: Blue Legume, The Parlour, Spence Cafe (with highly addictive bakery) or our current favourite the Fat Cat, whose flat whites and chocolate brownies are pure temptation.

A must on a sunny spring day is a trip to Clissold Park and its café run by Company of Cooks (Kenwood, Regents Park). Granted you won’t get lost like you may on the Heath, but it’s a great city park and there’s loads for the kids to do with a new playground and skate park, animal enclosures and plenty of ducks and swans to keep them occupied while you head off to the ice-cream van.

And if you find yourself in N16 after hours why not try The Waiting Room (formerly The Drop) below The Three Crowns, where you may catch a set from local Gilles Peterson or indulge in a night of Electronica, indie disco or 80s. Alternatively head over the high street to Babble Jar, all chandeliers and bare wood, for cocktails and live music. If you can bear to put a foot into Dalston (though still N16) pop into the speakeasy Ruby’s; then head straight back up to Oui Madame, a new French eatery from the guys at Favela Chic, nestled amongst the myriad of Turkish restaurants.

Next page: The Black Pig & White Pearls reviewed – and the Top 5 pubs in Stoke Newington