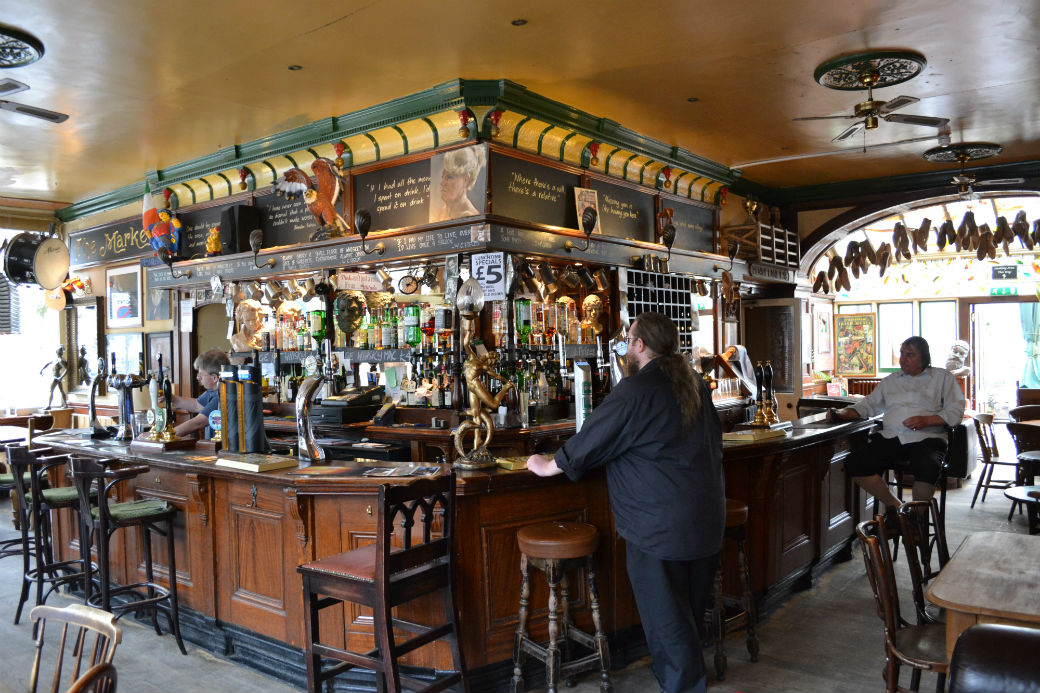 The Old Eagle is a long-term favourite. Which means that, in nearly three years of Kentishtownerism, it’s odd that we’ve barely given it a mention.

Part of an attractive 1830s terrace, and subject of a very early piece back in 2010 (read it here), the Eagle’s otherwise remained what it’s always been: a damn good secret on the Camden/K-Town threshold.

In fact, stepping inside, it’s memories, memories: back in 1997, as a fresh-faced young music publicist, I’d interview bands here to write their biogs. And over the years, too many impromptu nights to mention, from first dates to Xmas parties – and more than the odd sneaky £3 Bloody Mary.

Ah yes, the “world famous” (their words) Bloody Mary. Surprisingly strong, it’s a punch-packing concoction which adds a “dash of dry sherry” into the mix, the Eagle’s boisson de resistance, if you will. On this week’s visit we noticed it was now priced at £4, but still that’scheaper than any other pub in the area. And their house double spirits remain at a remarkable £3, with glasses of prosecco at £4. Bargain.

As for the beers? Not that exciting (Greene King IPA, Speckled Hen and certainly nothing like the selection at Tapping The Admiral) although there is Noble English lager (actually brewed by Greene King to feel like a Camden Town or Meantime beer), as well as the usual brewery fare.

But drinks aside, it’s the interior that will always draw a gasp. The Eagle is, quite simply, a perfect boozer.

Dark wood panelling, high bar stools, nude statuettes, busts, peeling photos pinned behind the bar, pewter tankards in a row, a ragbag of oils on canvas covering the walls; all this liberally sprinkled with chalked-up bon mots about the pleasures of drinking (far less rubbish than those of the All-Bar-One variety: “If I had my life to live over, I’d live over a saloon” – WC Fields).

And best of all? The assortment of old instruments dangling in the windows: acoustic guitars, violins, clarinets, drums, banjos…the effect of which is – what? – surreal? No, somehow, right. It fits; this is Camden Town after all, and exactly the kind of off-kilter boozer that once made the place so great. Now wander into the shabby-chic conservatory with its comfy sofas and shoes hanging in its entrance arch. Beyond, the garden is quirkiness itself, with sofas and even a table tennis table.

Last Tuesday lunchtime, the landlord had a bad back; we felt sorry for him as he struggled about the mostly empty pub, jazz tinkling on the stereo. It had been a while since we’d eaten here, so we decided to order a couple of plates to share from the fairly standard Thai food menu.

A mixed platter was crammed with spring rolls, samosas, a quite moist chicken satay, sesame toast, glew grob (crispy wonton with minced chicken and prawns) and prawns. It wasn’t especially cheap at £9.95, but tasty enough, and perfect to accompany a sneaky daytime pint. Worth noting, perhaps, that much less than a tenner gets you some pretty good food in the vicinity these days (a Farmer Tom burger, tasty wraps at Arancini Brothers or the lunch special at the Colonel Fawcett for example).

The other dish we tried was more interesting: a crispy cod fillet (so uniform we worried a little about its provenance) with a very well-made sauce, its balance of sweetness (from the basil), heat (from the chilli) and lime leaves quite lip-smacking.

A couple of solo drinkers remained at stools, playing with their phones, the silence audible. Quite different, then, from the lively crowd that fills the place most evenings, that typical K-Town mix of ages and types, from indie kids to regulars and meeja types.

Because the place has never changed, we assume it never will. But look at the fate of nearby Pizza Express, an institution if ever there was one (whatever we might think of the chain itself).

So if you haven’t been to the Eagle for a while, pop down this weekend at some point, especially in the face of all the changes sweeping the neighbourhood. It would be a terrible shame for it to go.