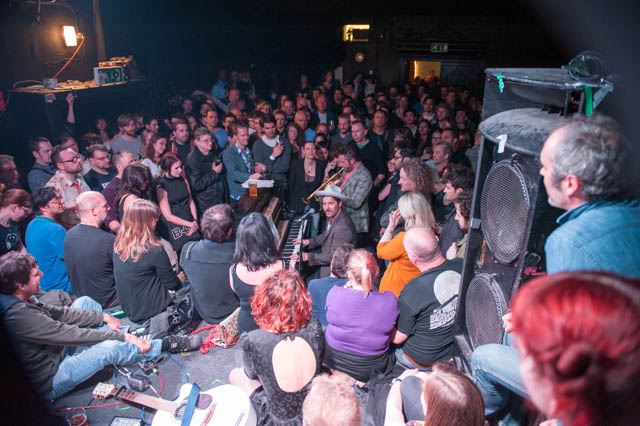 The last song of the last gig ever to be performed at the legendary Bull & Gate was I Wanna Be Like You from Disney movie The Jungle Book.

“So much amazing music started at this fucking amazing place,” said sweary headliner Ed Harcourt at the end, armed with more than a couple of good one-liners. “But I tell you what, I bet the food’s gonna be great. I’ll be a frequent customer – under the piano dressed as Charles Dickens.”

Take that, Young’s! Anyway, we hadn’t seen the Bull & Gate this buzzing for years. A very Kentish Town mix crammed every nook and cranny of both live venue and the pub, from tattooed hipster kids to boozy regulars and eighties throwbacks, Joy Division t-shirts bumping past with regularity.

But seeing them on stage for the first time in years, it took a while to re-ignite any kind of feeling. Lead singer Tiny’s once provocative appearance (so fashionable back in 1999 that he catwalked, belly hanging out, in London Fashion Week) has the inevitable whiff of the middle-aged. Still, debut single Same Band had a winning sense of spirit, but it was only as they finished their set with minor hit, the swaggering Stay Young, that there was a rush of – what? – nostalgia? No, something more.

Finally, gruff-voiced troubadour Ed Harcourt, resplendent in ‘tache and Panama hat, appeared. He’s never quite made the big time, despite Mercury nominations and songs as strong as Damien Rice and co. “How can I follow Ultrasound on that stage?” he said gamely, his apparent logic being therefore to set up the piano in the middle of the space, the audience and trumpet player pressed around in true singalong stylee.

And the room was rapt with delight at the flurry of classics, many from excellent 2001 debut album Here Be Monsters: She Fell Into My Arms, Apple Of My Eye, Shanghai. But the spirit of the night constantly overturned expectation: “I thought this was gonna be emotional,” Harcourt says at one point, “and yet no-one knew this fucking song. I’m gonna stick to covers.”

And so covers he did. Challenging what some might define a “party” at the final night of this iconic venue, a good old singsong in fact seemed the most Titanic-ly perfect way to go. Wild Horses, Snoop Dogg, The Flumps theme tune (well, just the horn riff) and then the majestic Jungle Book standard, I Wanna Be Like You, which really got everyone moving.

Applause, shouts, cheers. Could a Disney song – quite brilliantly – really be the last song ever to be performed at the Bull & Gate? The venue which broke bands like Blur, Manic Street Preachers and Coldplay?

Nope. Ed couldn’t help but return for that old chestnut Hey Jude, complete with arm-waving (either cringe-tastic or ironic according to one’s viewpoint). Still, it was strangely emotional. “Take a sad song, and make it better…”

A sweatbox in the tiny back room, it was almost a relief to pile onto the cool street outside. And intriguingly, as we left, a little bird told us that the fight for the Bull & Gate to remain a music venue may – just may – not be over.

For now, however, its ending was suitably mythical.