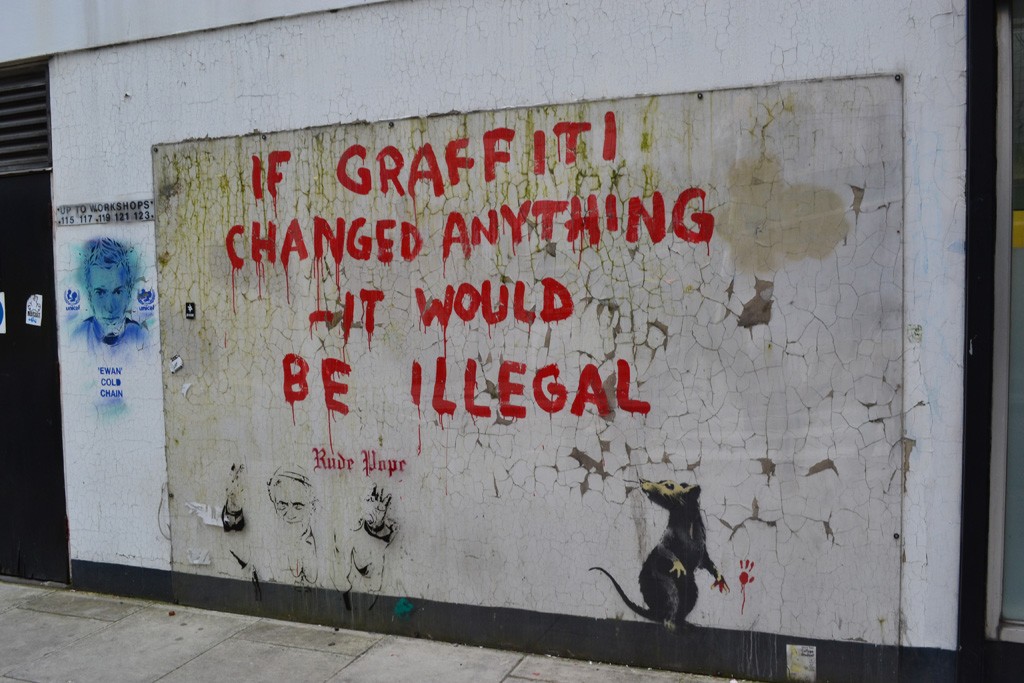 Street art icon Banksy has had a long and creatively fruitful relationship with north London. Some of his most celebrated pieces have been sprayed on the walls of these parts, after which an inevitable battle then unfolds, with taggers, rivals, council cleaners, Perspex-erecting residents and/or opportunist thieves all getting in on the action.

The hoo-ha is, of course, is as much a part of the artwork as the piece itself. Much like our beloved lost nightclubs, a good Banksy probably shouldn’t last forever, is much imitated, and produces a highly emotional response from all who feel a personal connection with it.

Here’s our pick of the most interesting local(ish) Banksys, the genuine ones to appear in the area over the last decade or more – and what became of them.

Next: Tox and Rats in Kentish Town

5. Tox and Rats in Kentish Town

A selection of Banksy’s famous rats appeared in and around the streets of K-Town and Chalk Farm when the Bristolian artist first became active in London. In fact Camden Council were among the first to protect their own such rodent – sprayed on the wall of their Judd Street HQ – behind a sheet of Perspex.

However, when Kentishtowner Bhupen Raja attempted to similarly frame Banksy’s more recent effort on the wall of his Jeffery’s Street flat last year, the council forced him to remove the unauthorised plastic. The artwork, a tribute to jailed hardcore tube train tagger (and Camden boy) Tox, was soon defaced and then painted over. Mixed messages galore.

4. Fighting for survival in Archway and Stokey

Over on Stoke Newington’s Church Street (as featured in our current Kentishtowner print edition), Hackney Council got themselves into a similar tangle with this caricature of the royal family. Originally commissioned by Blur as the cover art for their 2003 single Crazy Beat, it had been a much-loved landmark of the street for more than eight years, until the day the council set about it with black paint. The work was partially saved after local residents jumped in, and the council forced to make excuses for their “mistake”.

Meanwhile, Haringey Council saw off Archway’s famous hitchhiking Charles Manson in prison clothing with their high pressure jets. Perhaps Manson’s request to be whisked off “anywhere” was taken a bit too literally.

3. High visibility in the West End

Another large Perspex shielded piece can still be found today on the corner of Cleveland and Clipstone Streets (our main pic) in deepest Fitzrovia.

Westminster Council seem happy to permit the de rigueur Perspex here – maybe they even erected it themselves?

Just around the corner on Newman Street was the spot of the internationally acclaimed One Nation Under CCTV, painted deliciously behind a security fence and directly underneath a surveillance camera. Lore has it that a team of accomplices with scaffolding somehow gained permission from the Post Office (owners of the wall) to carry out some ‘essential work’. When they cleared off, Banksy had struck the West End in grand style.

2. The inevitable fate of the Chalk Farm Maid

The folks at the then newly reopened Roundhouse were chuffed to have one of the Banksy Maids appear, surreptitiously sweeping rubbish under their wall, which drew priceless media attention to the venue. Its pavement-side location also proved irresistible to jokers, taggers and chancers, who set upon it on an almost nightly basis. After being scratched out, sprayed over and even carefully restored by persons unknown, the cycle of activity eventually became too much and the original work was lost.

The Roundhouse have kept street art alive on the site though, firstly commissioning a huge leopard and now a locomotive to liven up the dull concrete lining the portals to Primrose Hill.

And finally: #1 The battle of Regent’s Canal

1. The battle of Regent’s Canal

Our favourite local Banksy work appeared one night in December 2009, at four separate locations along the canal towpath, in the heart of Camden Town. Most controversially, he painted over one of the capital’s original 1980s graffiti pieces, by the respected Robbo, reimagining it as wallpaper.

Robbo and his “team” took offence, and cleverly defaced the new Banksys, including changing his wry, sinking I Don’t Believe In Global Warming to “I Don’t Believe In War”, plus the tag line “It’s too late for that sonny!”

See the full photo story of the tit-for-tat graff beef over on the Banksy website.

Fancy a gander at some outsider art of a different kind? Grab your copy of only 200 limited edition Kentishtowner Cultural Maps, by local artist Sian Pattenden, as featured on the cover of our current print edition.