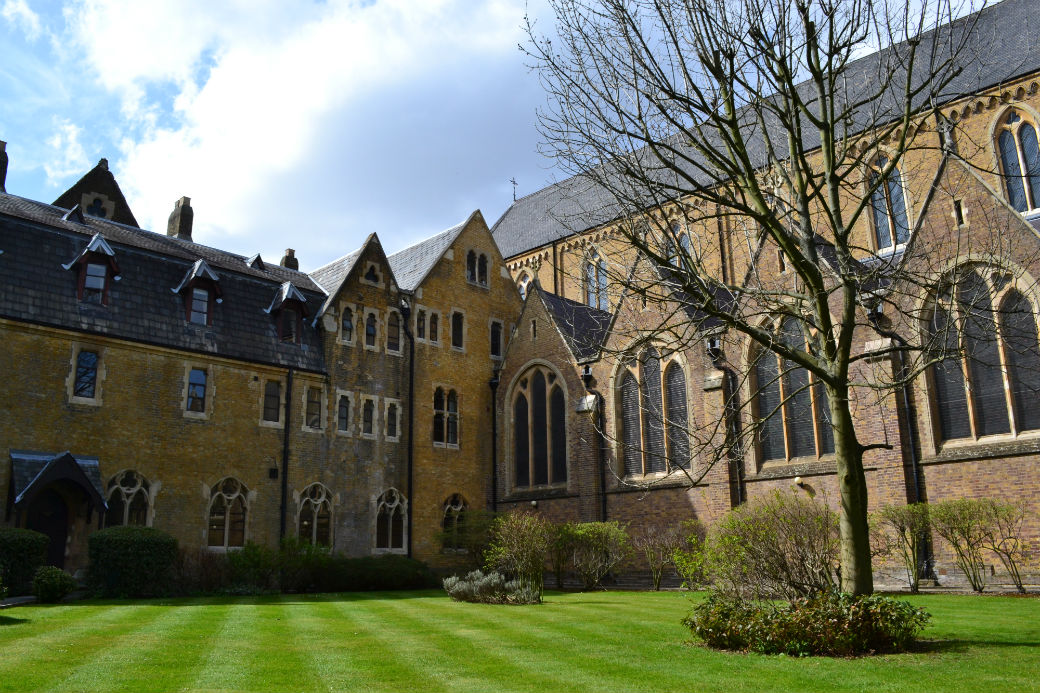 Want to escape the media rattle today over Thatcher’s funeral? Come with us, we’ve just the sanctuary. Here the clouds are pillowy, the lawn mowed, and a sense of silence pervades.

And like any worthwhile destination, what makes St Dominic’s Priory so special is the journey to reach it, especially if you’re walking over from central or east K-Town.

Leave the clang and bump of Kentish Town Road and weave through the industrial estate around Holmes Road and up always lively Queen’s Crescent. Then cross Malden Road – perhaps stopping to imagine the trams that once ran up and down – into bucolic backwater Quadrant Grove.  At the top, on the outer fringes of the postcode, stands the priory and church.

The striking clock tower in the main photo above was the first building in this three acre oasis to be completed back in 1867, just six years after a Cardinal Wiseman invited the Dominicans to establish a major Roman Catholic Centre on the land. And even in 2013, this peaceful quadrangle is owned by the Dominican community who still live here.

Now head to the adjoining church, with its not-so-snappy moniker, The Priory Church of Our Lady of the Rosary and St Dominic.

It’s a whopper. Some stats? A massive 299 ft long, 80 ft high, 14 side chapels, all of which make it one of the capital’s biggest churches. In fact, its size was so controversial that there were moans in the House of Commons that “the Papists had erected a dangerous building”. Seriously, a dangerous building? Hard to imagine now.

Whether you’re religious or not, its interior is vast and contemplative. Perfunctory old Malden Road feels very far away. And for the sightseer, the church houses a historically important 4-manual organ made in Kentish Town’s Rotunda Works back in 1883.

But my advice? Simply take a pew, and sit. For a moment or two.

Now pop back outside and stand to the north of the main entrance in the alleyway. Alan Cheales Way (named after a very popular parish priest who died in 1996) has only been a path since 1932. But more interesting is that it’s like a magic chute connecting one of the earthier corners of NW5 with swanky NW3. Curve your way up the path, around the vast bulk of church, to the other end.

Now turn around and stand, admiring the Gospel Oak high rises, the imposing primary school, the vast Victorian place of worship, past and present colliding. Behind you, the grand villas of Belsize Park climb steeply, so near but really another world away.

And that kind of juxtaposition? It’s the essence of inner London.