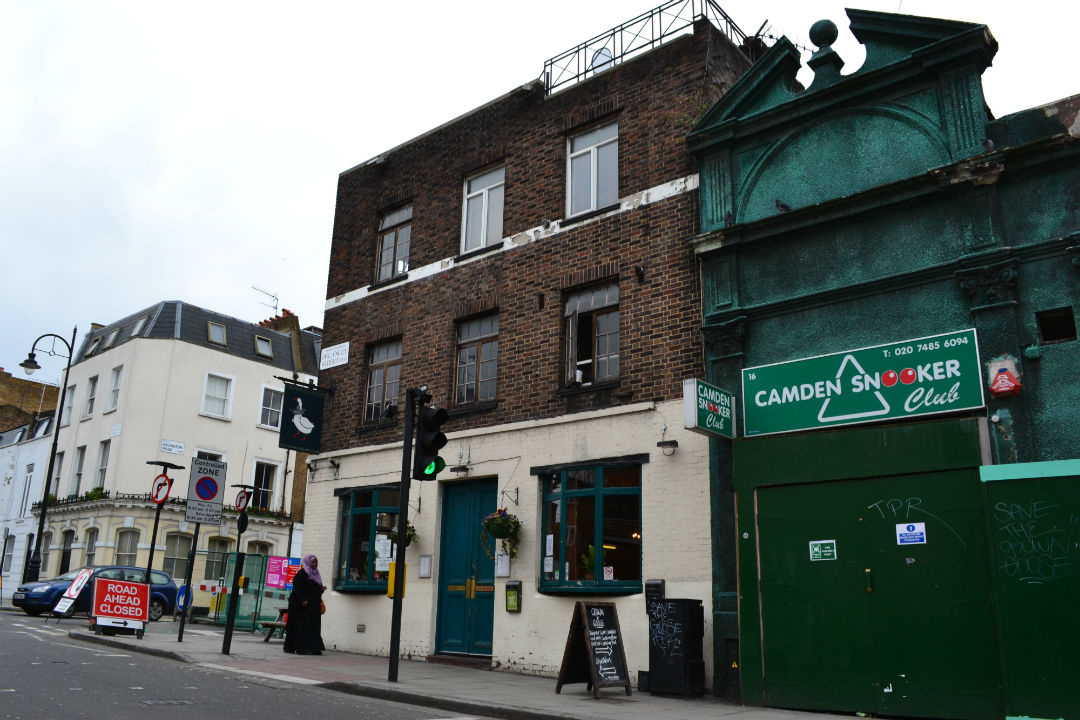 This one is quite a biggie. Anyone who knows and loves Camden Town, or who has lived or worked there in the last twenty years, will feel a pang to hear the Crown & Goose, that glorious sidestreet boozer, is about to close its doors for ever. “The exact date of closure is yet to be confirmed but it will be within the next three months,” says Camden Bars general manager Ben McDonald, “and then the wrecking ball will swing into the pub.”

We have to say that sadly, we’re not surprised. When we passed to take these shots a few weeks ago it was more than apparent that the building dangling on the corner, with its forlorn upper floors and adjoining shell of a snooker club – where seven-times world champion Stephen Hendry once practised – was now unlikely to be saved.

Beyond the warmth that we all feel for the place it’s worth remembering that it’s neither an especially old pub, by London standards, nor building. The name only gained its anserine suffix in 1991; before then it was known as the Crown, and until the 1950s just a humble beer shop, hence its unique feel as a “house” rather than a pub.

And yet it’s this cosy living room quality – almost a predecessor of vogueish small tap rooms like the Southampton Arms – that was its strength, the sensation of pushing open the heavy door and entering a clandestine room packed with a lively crowd. Timeless, as if it went back centuries not decades, and pre-smoking ban, the room often thick with a conspiratorial fug.

And of course the Crown was a gastropub pioneer back in the mid-nineties, serving reliable, posh grub when it was still a novelty, yet with zero pretensions. I lived down the road for a year in ’98 and we rarely ate or drank anywhere else, especially as my flatmate was a barman and riotous lock-ins prevailed on a nightly basis. It was simply where everyone – who was neither a tourist nor out-of-towner – would congregate.

Long time regular Suggs from Madness pretty much agrees. “I love the Goose and I’ve been drinking there since I was 16. Both my daughters have worked in there and many of Madness’s successful moments have been celebrated in the pub. It holds a very special place in the heart of the community and I will be devastated to see another important local pub close.”

In a final court appearance last month, the owners of the building, Barclays Discretionary Trust, crushed any last hope that the operators had of saving the pub. Michael Nicholas, pub landlord, says: “The Trust’s representative D E & J Levy, were never interested in anything but demolition and property development. I believe the Trustees have not acted in the best interests of the beneficiaries of the Trust”.

And Ben McDonald (right), now at the helm of Kentish Town’s Junction Tavern, believes a resolution could still have been possible. “If the Trust had have been willing to listen, we believe we could have found a viable solution that benefited the Trust and saved the pub.”

So alas, a large bar or restaurant will soon be constructed on the ground floor with residential accommodation above. “At least,” says McDonald, “the operators of the Crown & Goose have not been fighting the decisions on their own. Thankfully residents, pub regulars, Camden Council and local councillors have all fought the good fight.”

But sadly it was not enough.

Check out two more poignant blackboard pictures over the next couple of pages. Oh, and why not share any memories below?

Words & Main Pics: Stephen Emms
Other images with thanks to the Crown & Goose website