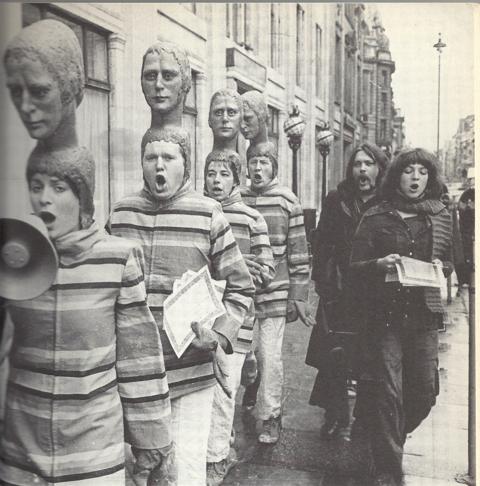 Why It Matters: Recording Our Alternative Theatre

Did you know that Kentish Town is central to the history of alternative theatre in Britain? And my project, Unfinished Histories, aims to record as much detail as we can on the subject, and from as wide a range of sources as possible. By conducting oral history interviews and gathering archive material (focusing on the years 1968-88) we can share our discoveries through our website as well as exhibitions, publications and events.

The alternative theatre movement was a loose grouping of companies that began to emerge in the late 1960s, partly as a result of the abolition of theatre censorship in 1968, and partly in response to the growth of the counter-culture, hippies, rock music, multi-media and the influence of the art schools. On stage this expressed itself through experiment with form, movement, language and visual imagery; on the streets in new large-scale venues like the Roundhouse, with its celebrations, festivals and fairs. The company names were as inventive as the work: Phantom Captain, Matchbox Purveyors, Lumiere and Son.

Alongside this, other groups grew up with an agenda of taking work out to communities long excluded from conventional theatre, and they were joined in the 1970s by an upsurge of political theatre companies with names like Agit-Prop Street Players, Recreation Ground, Pirate Jenny and The General Will. In the mid-1970s came the women’s companies – Monstrous Regiment, Sadista Sisters, Beryl and the Perils, and Clean Break; black and Asian companies like Black Theatre Co-op, Carib Theatre, Double Edge and Tara Arts; gay and lesbian groups like Gay Sweatshop and Hard Corps; and disabled ones such as Graeae and Deafinitely.

What held them together as a rough-and-ready movement, despite their different agendas, was a rejection of the conventional theatre of the West End and a determination to ask questions: how theatre should be made, who by and who for, how companies should be organised, how to create the work that appeared on stage. In turn this led to a growth of new small-scale venues like Keskidee Centre, Open Space, and Action Space Drill Hall, and to companies touring theatre to audiences in one-o’clock clubs, on estates, in working men’s clubs and schools.

The best outcome was that the Arts Council was forced to develop policies to support this burgeoning new work. Writers began to talk about experiences formerly under-represented in theatre and to other companies’ rejection of the text all together, or of the individual writer in favour of the group.

One of the key initiatives in community arts grew up in Kentish Town where Ed Berman rapidly recruited an entourage of arts workers. They staged Dramascapes in playgrounds and under viaducts, set up lunchtime theatre at the Ambiance Cafe and the Almost-Free, established the Dogg’s Troupe street theatre, the experimental The Other Company and the famous Fun Art Bus (pictured). These all operated within the over-arching structure of Inter-Action, a group where members lived communally. They also set up the first Community Media Van in Britain and, as is well documented on this site, the first City Farm – which rapidly led to numerous others, and established the Talacre Centre, the first purpose-built community arts centre.

Unfinished Histories aims to capture snapshots of these companies, or at least those with a connection to Camden or Lambeth: by recruiting a team of volunteers who will be given training and then matched with ‘originators’ (individuals connected with the early companies) they can work together to create stories online. They will also draw on this material to create an exhibition opening next November at Ovalhouse, Lambeth, and then coming to Kentish Town Community Centre and Camden Local History Library in Holborn.

We are very keen to hear from anyone who was part of the movement and wishing to be involved in the project, as well as from those who have memories of it as audience members or workshop users. We also want to hear about the broader alternative culture that supported the movement such as squatting, community print shops, food co-ops and activism generally.

And yet we need still more help, too, especially a team of volunteers to work on the web pages and the exhibition, which might appeal to you if you were active in alternative culture at that period, or if you’re looking for a new career direction and are interested in curatorial work and theatre history; or maybe if you’re simply starting out in your career and want to develop skills, knowledge and experience. To find out more please head over to our website here.

1 thought on “Why It Matters: Recording Our Alternative Theatre”