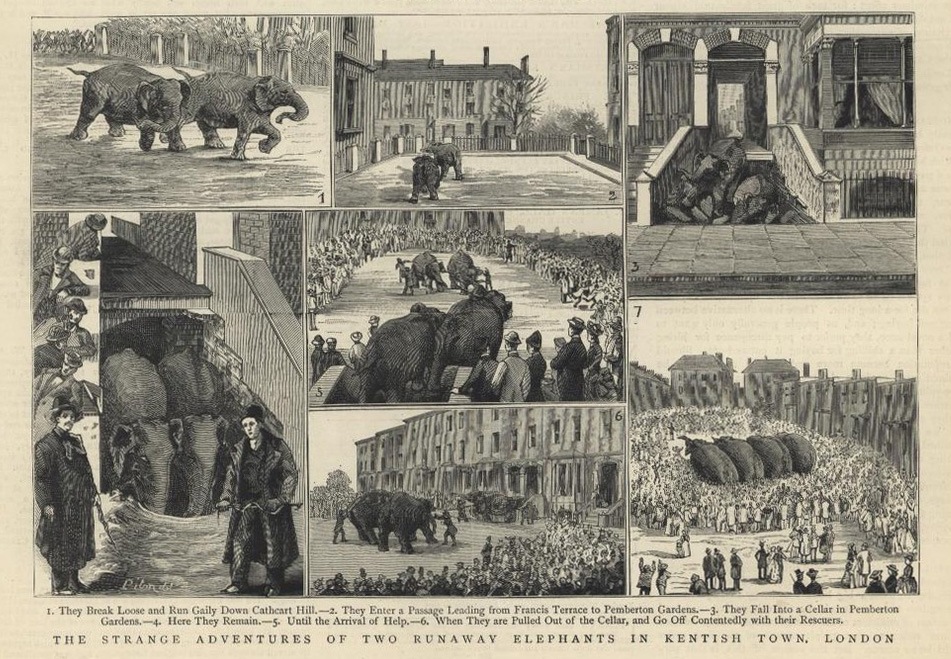 This fetching line-drawing (click it to view full size) – published in The Graphic in 1884 – depicts one of the more random moments in K-Town’s documented history, the day two elephants ran amok through the local streets.

They had been dispatched as part of a travelling circus booked to play at Agincourt Park, a field just off Mansfield Road now occupied by the road of that name. Interestingly, the British Mail newspaper report of the incident places Gospel Oak as in ‘Lower Holloway’, revealing much about how North London’s urban sprawl had yet to separate areas we now feel to be reasonably far apart.

Four elephants were to be among the highlights of the big show, but at a crucial moment of the unloading process the second pair to emerge from the trucks, named Ida and Palm, were suddenly startled. They bolted, making light work of flattening the yard gates, and knocking a keeper for six (dislocating his collarbone) before careering up the Kentish Town Road.

Upon reaching The Vine, they veered right up one of the narrow lanes of which only Little Green Street remains today. The second collarbone casualty of the day was a man trampled underfoot by a herd of pedestrians stampeding for cover as their quiet backstreet momentarily became NW5’s very first trunk road (sorry).

Onwards charged Ida and Palm, emerging onto Highgate Road where they made an optimistic and ultimately unsuccessful attempt to vault the wall of the large Baptist Chapel, before choosing the equally poorly appointed escape route of Twisden Road as a hasty alternative.

This led them trumpeting straight up Chetwynd Road, thundering across Dartmouth Park Hill and crashing down the then-private Cathcart Hill, the landowner’s fence proving less of a challenge than the chapel’s pious stone boundary.

The spooked elephants found themselves on Pemberton Terrace, where another ill-advised manoeuvre was to prove the final chapter of their flight. They made up the steps of the terraced houses, where “their combined weight on the flooring of the passage caused it to give way and they fell bodily into the cellar,” reported the papers.

Today the spot on Pemberton Terrace, squeezed between numbers 29 and 31, barely looks capable of fitting a single elephant (if you were planning such a thing) let alone a pair. Yet reports of the event went global (much of the online coverage to be found comes from papers published the following weeks in New Zealand), and the populist editors of The Graphic clearly knew such a story would make a compelling artwork.

The animals were finally removed from their basement level predicament with help from Jim and Rose, the other two circus elephants, who were brought along to pull them back out onto the pavement before a more sedate walk of shame back to Agincourt Park to make the scheduled show.

And what of the circus itself? It was run by Messers Sanger, among the most famous travelling troupes of the era, two brothers from a family of 10 siblings. George and John clearly inherited their enthusiasm for the travelling performance business from their father, a spirited navy pensioner who’d fought at the Battle of Trafalgar, losing three fingers plus a sizeable chunk of his head in the process, the result of some tasty slashes of a cutlass.

With his first pension payment, savvy Sanger Senior invested in a peep show and hit the road with his wife and family in tow. They subsequently added to their repertoire with a selection of human curiosities and a popular conjuring booth, which traversed the country’s popular fairgrounds.

His sons oversaw the family business’ later transition into a fully-fledged circus, complete with exotic animals, of which the unfortunate elephants were unwittingly to become the most notorious.

During the very same year as the elephant incident, the brothers split, the highly successful ‘Lord’ George eventually retiring with a menagerie of animals to a large farm just up the road in East Finchley.

From there he published a celebrated autobiography ‘Seventy Years a Showman’, before being brutally murdered with a hatchet by one of his staff for reasons unknown.

In a final gruesome twist, the perpetrator in turn then committed suicide by prostrating himself on the train lines at Highgate, and was decapitated.

As for the elephants? Their very own moment of soaraway tabloid attention ended more peacefully, the remaining circus years never again reaching the tusk-trembling drama of that visit to Kentish Town in the spring of 1884. A day that, dare we say it, they surely never forgot.