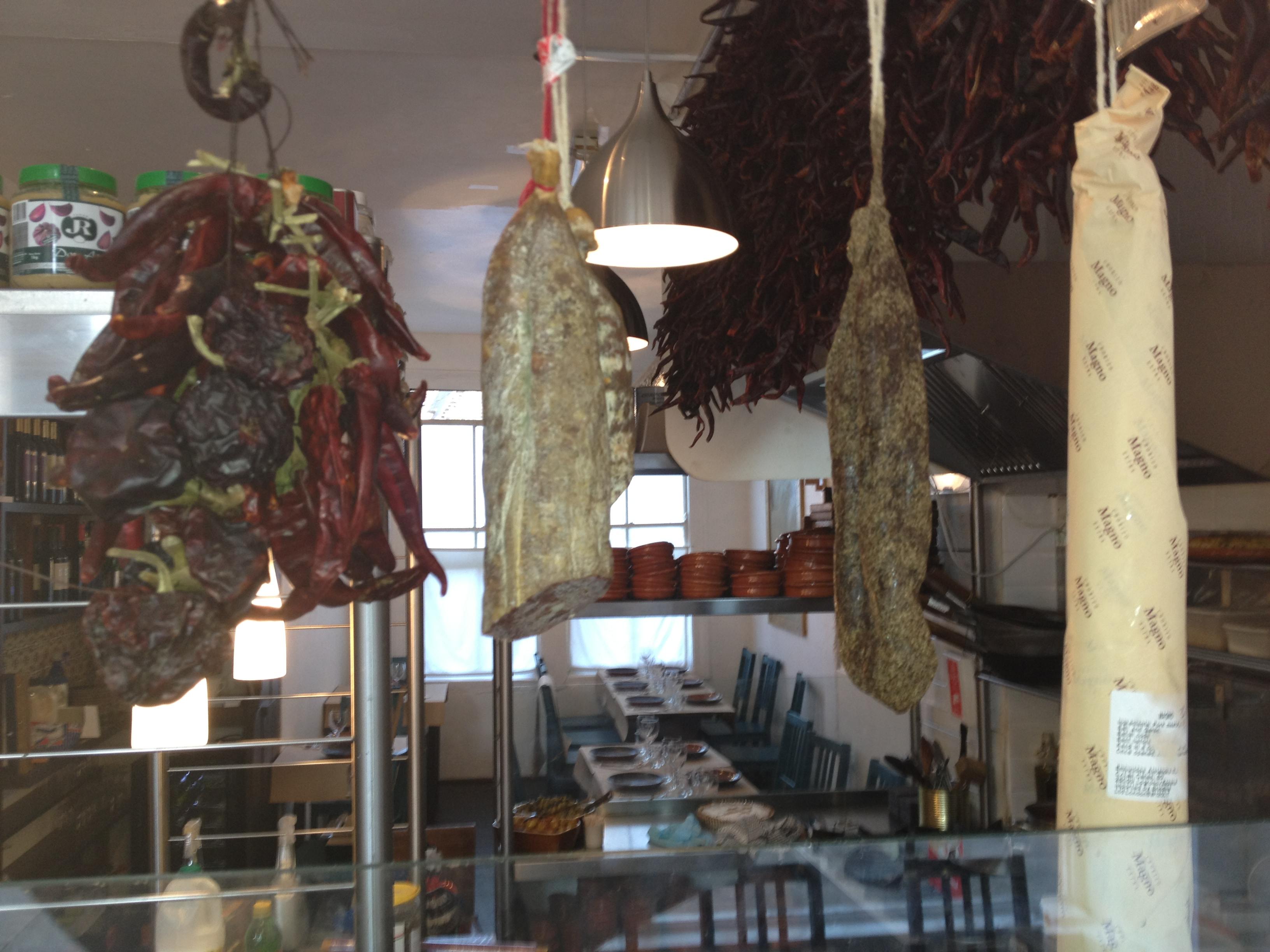 Like two people who had clocked each other, but were just too shy to do anything about it, we had heard about Del Parc, and they us, for a while. We had tweeted them, and they us; listened guiltily to others’ endorsements and gushing reports. So finally, it was time to act. I picked up the phone and made the first move. We had a date.

The restaurant has been on its current site for 20 years, from an early incarnation as a daytime cafe. Its interior channels an Ibizan ambience, in that serene Buddha Bar-meets-Bedouin tent kinda way: ceiling drapes, tiling, chill-out soundtrack, and large wall sculpture by a Kentish Town-based architect.

But what really sets the place apart is that right in the middle of the room is chef Steve Morrish’s glass box kitchen, fascinating and addictive to watch, its various meats and huge cape of chillis hanging over assorted bowls of olives, cornichons, and peppers. We chose to sit at one of two tables with a ringside view of Steve’s effortless dance of chopping, pan-frying, and stirring.

We’re not massive sherry drinkers, but co-owner Alan recommended the lightest Fino from Colosia to set us off on our merry voyage around the coasts of Southern Spain and North Africa. The accompanying stuffed gordal reina olives were juicy and succulent, spiced roasted marcona almonds fingerlickin’ and moreish.

But the winning idea at Del Parc is that you don’t make any menu choices, after suggesting any dietary requirements. This, said Alan, evolved from the boys having a longish menu of different sharing plates only to be told by regulars that they wanted whatever Steve was cooking. It makes sense. And there’s no set price; diners are advised that the bill will be around £30 per head, if you share six plates of tapas.

It’s like a smart supper club, really. And, as with other restaurants where choices are made for you (upscale Nuno Mendes joint Viajante springs to mind), most things work, with just the odd one that doesn’t. Take our escabeche Galician mussels, for example: pickled in vinegar and spices, their texture was quite crumbly and perhaps not as divine as their plump, shiny, fresh equivalents; yet no matter, as the following dish was a corker.

Oh yes, the cecina – salted and dried beef sourced from Brindisa – with bitter sweet pickled fig, curd cheese and carrot salad (right) was both beautiful to look at and light as air, a sweet-savoury creation we’d return for. And a spate of dishes continued this streak: Moroccan Lamb meatballs with apricot and cumin with mint labneh, zingy and deeply savoury in equal parts; warm Catalan Spinach salad with pine nuts sweetened with big Malaga raisins; and, most impressively, a ‘signature dish’ of chicken with apple, coriander, mint and pomegranate, with its lively straddling of European and Asian influences.

Two dishes were less thrilling, for these tastebuds anyway: a tortilla of ermesenda (a creamy cow’s milk cheese from the mountains of Cataluña) with sage and leeks, and some giant black tiger prawns, whose tangy garlic and wine sauce we nonetheless mopped up fiendishly. A balanced Vina Marro Rjoca (from the lovely Theatre Of Wine opposite), priced at £18, was spot-on.

It was quietish on our Friday night visit, in the depths of January, and so by 930pm, Steve had turned the kitchen lights off, and was carefully cleaning each piece of equipment. The room darkened, candles flickering, we left to climb Cathcart Hill for a nightcap in front of the fire at the Lord Palmerston.

A low-key Moro? More relaxing Ottolenghi? Call it what you want, it’s unique in this patch of north London.

This is box title
Kentishtowner Rating: 8/10. 167 Junction Road. Meal for two with bottle of wine is around £80+