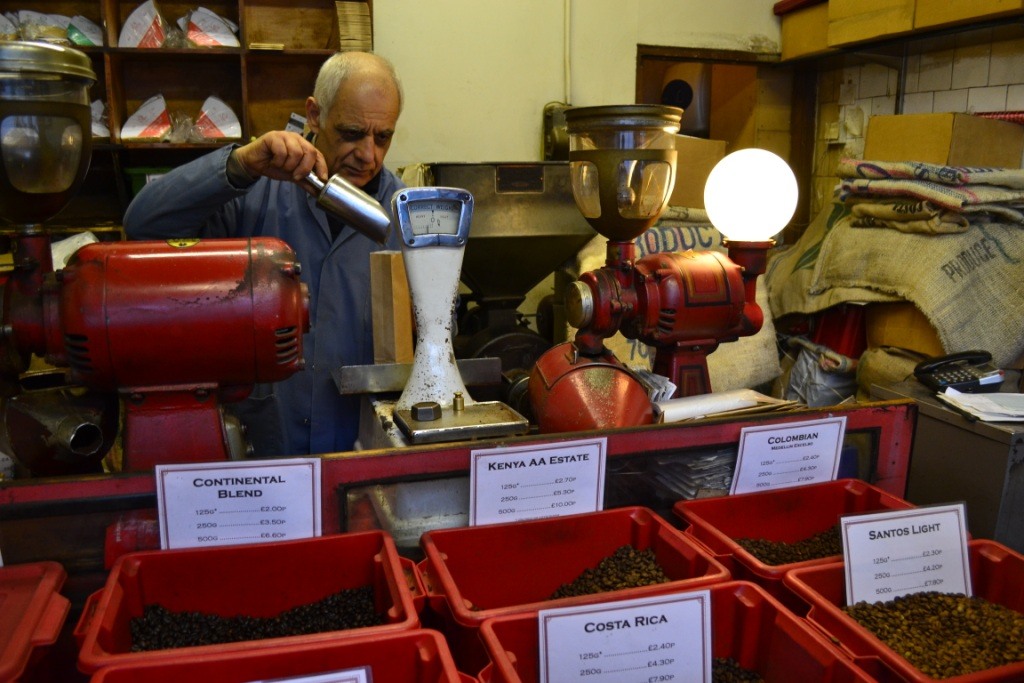 The story of the Camden Coffee Shop on Delancey Street

Stepping through the door is a rare moment of authenticity in a world of the salvaged, restyled and re-purposed

Hands up if you’re a caffeine fanatic but have never visited the Camden Coffee Shop? I reckon there are a few out there.

It’s on Delancey Street for starters, the one-way sweep up from the high street towards Regent’s Park. And it’s tucked away on a parade of retro Mediterranean restaurants, opposite once doomed boozer the Crown & Goose (now reinvented as guitar shop).

Sixtysomething George Constinantou has run his tiny outlet since taking over from his uncle back in May 1979. Originally from Cyprus, he came to London ten years earlier and trained as an engineer, but eschewed it all in favour of being his own boss.

Stepping through the door is a rare moment of authenticity in a world of the salvaged, restyled and re-purposed: with its rusty machines, original tiling, chipped scales, plastic trays of beans, and sacks stacked flat, it’s an oasis of roasting and grinding. A refreshing antidote, in fact, to nearby Blues Kitchen’s artfully battered facade. And of course, with the rich aroma in the air, the senses are on overdrive: “It’s like a museum!” is perhaps a natural exclamation, except the place is nothing of the kind; it’s simply an artisan workplace unchanged for three decades.

Clad in a blue overall, his bald head tanned, George has the appearance and rhythm of a master craftsman. The shop is busy on our visit but later, on the phone, he explains that the roasting is all done on the premises using one machine from the 1960s and another from 1912 or 1918 (he isn’t quite sure which). The older is “better made”, hence his attachment to it. And both work by roasting beans from the core: spun slowly, they shed their husks as they brown. To ensure a prevailing freshness, they’re not ground unless a customer requests them that way.

George sticks to a small range of six or seven coffees at a time. Note the unfussy names: Continental Blend, Kenya AA Estate, Costa Rica, Ethopian Mocha, Colombian, Santos Light. Regular readers will know how strong we like our hard stuff, so we chose a Santos Dark, and, preferring them ground, watched the coffee pouring out, the smell wonderful.

The obvious question is: why doesn’t George have a sideline selling the actual drink itself? After all, a single cup can be sold for the same price as a bag of beans. “Too small,” he says. “Too difficult in this space,” before pointing out that everyone on the street – “the pub over there, the restaurants next door” – uses his beans for their coffee anyway. Not to mention the “three generations” of regular customers, as well as tourists “from across the world” who make the pilgrimage.

George concedes that London’s coffee obsession is one trend that shows no sign of abating. And, he says, with something like a giggle, if one of his kids doesn’t take over when he retires, a whole army of fans will fight to ensure the shop’s survival – for at least the next three decades.