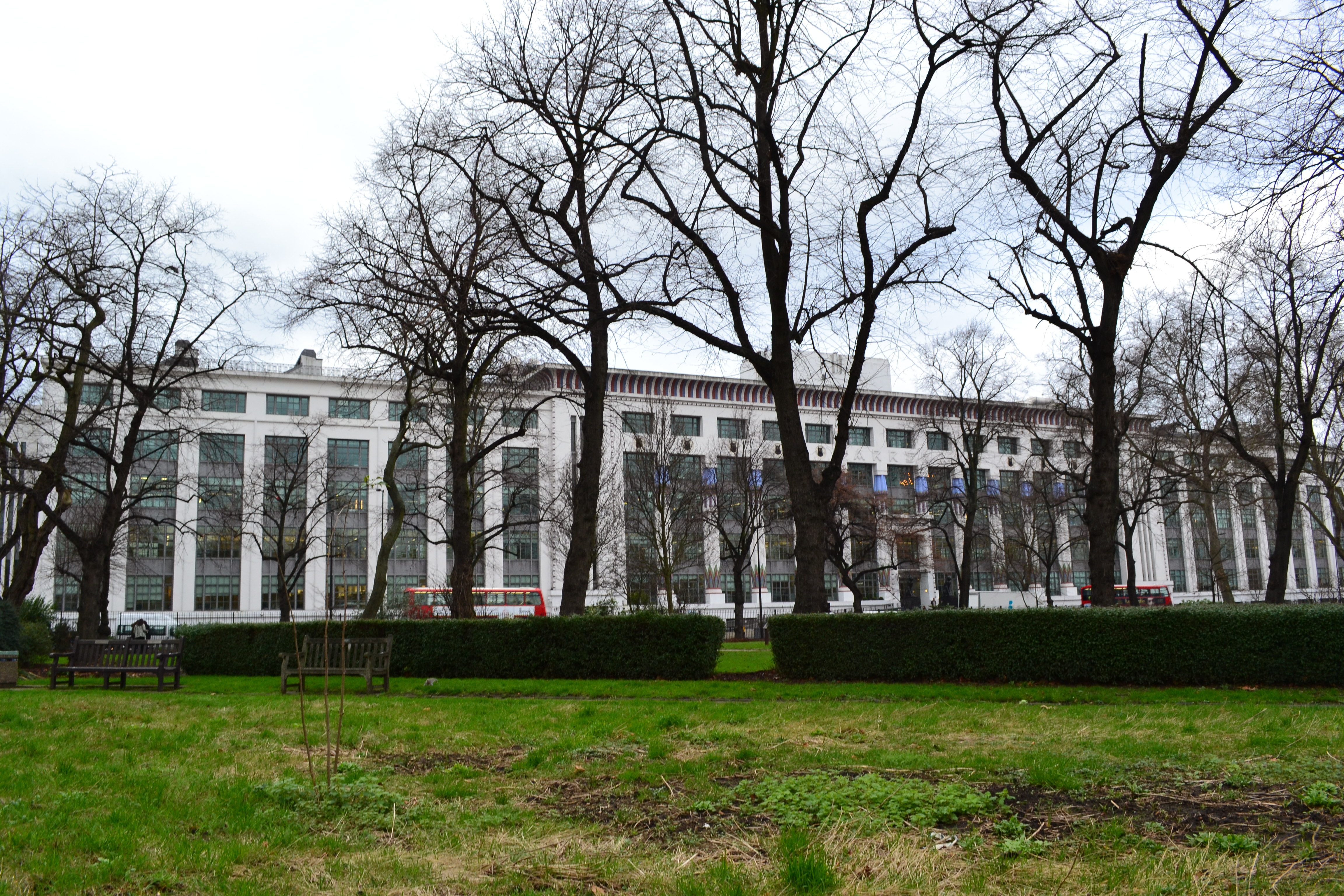 Could this be the most gloriously incongruous building in all North London? Giant Black Cat statues; oversized Art Deco grandeur; curious hieroglyphic stylings. Along with Western Avenue’s celebrated Hoover Building-turned-mega-Tescos, Greater London House (to use its bland current name) is among the capital’s finest eye-popping examples of Egyptian-influenced Art Deco architecture.

As the progressive spirit and indelible social changes of industrialisation swept the world, the great tombs of Tutankhamen and his bejewelled, mummified ilk were being revealed along the Nile, proving a popular theme for industrialists wanting to make the thrusting testosterone-heavy corporate HQ statements of the day.

Until 1926 the site had held a sweep of communal gardens fronting a quite desireable Mornington Crescent, part of the Duke of Bedford’s swanky Estate. But a wily developer managed to snap up the land rights to the gardens; the horror at their destruction actually proved enough to spur the foundation of the Royal Commission on London Squares.

Looking on the bright side though, the subsequent erection of such a colossal work facility saved Mornington Crescent tube station, under the shadow of closure since 1924. And despite its Crescent oasis-obliterating birth, the aerial shot from the year of completion shows a rather grand addition to the stuccoed terraces and railway lines all round.

Harrington Square sits opposite, barely recognisable as a much smaller triangular feature of the 1840s Bedford Estate back in those days. Heavy bombing of Euston in WWII, followed by 1960s tower block brutalism saw the forced return of a more communal garden space to the area, providing today’s almost rural snatched vistas of the vast building (main pic).

Named as Arcadia Works after the previous Carreras factory on City Road which it replaced, the project was the brainchild of Russian-Jewish-via-America philanthropist and inventor Bernhard Baron, who had come up with a revolutionary cigarette-making machine that earned his fortune.

Here he is posing for the paps at the dedication of the brand new factory in 1928, when he was to proclaim it – without so much as a whiff of modern day emphysemic irony – as a most “healthy and pleasant place to work”.

The Carreras company’s origins are unclear, however Charles Dickens refers to the poor Spanish residents clustered around Somers Town in ‘Bleak House’ and census data reveals generations of tobacco traders in the area bearing the name for almost a century before. The ‘Black Cat’ brand of tabs was central to the global image of the company by the 20s, and Egyptian tobacco the weed of choice, so the theme of the building obviously made sense.

It was wildly embraced. For the opening, actors in Egyptian regalia performed dramatics and a chariot race was even held along Hampstead Road. But alongside their architectural pretensions, the Carreras bunch were real innovators.

They had been the first fag company both to introduce cork filter tips and offer gift coupons in packets, both revolutionary moments in smoking’s chequered commercial history. The new factory was proclaimed to be the world’s most advanced, and was the first in Britain to make use of pre-stressed concrete and the radical technologies of air conditioning and dust extraction.

There was an honourable effort to support workers and their families at the factory and it produced a happy working environment. In Camden History Society’s millennium project ‘Catching the Past’, a series of interviews with ex-employees reveals such workday features as subsidised lunches, sports tournaments, a Miss Carreras beauty competition and an active C.A.T.S – the Carreras Amateur Theatrical Society.

Colour-coded uniform collars ensured that workers did not stray from their correct floor on the eight story complex and there was a ban on all cosmetics for fear they might taint the tobacco, but people stayed with the firm as lifelong loyal employees.

The dream was to end in 1958 with the announcement that production was to move to Basildon in Essex, which for all intents and purposes was the countryside. Around two thirds of the staff took up the offers of resettling in houses there, commuting back to Camden Town until the move of the factory was complete.

The huge building was commandeered by the GLC who, as well as renaming it, stripped out all the quirky Egyptianisms, preferring an en vogue municipal feel as the 60s swung into action. One of the original Black Cat statues went to Basildon, the other to the company’s factory in Jamaica. Once again at Mornington Crescent, the conservationists were in vocal uproar.

Yet in the late 90s, with the GLC but a local governmental memory, a new sympathetic Taiwanese owner secured its immunity from the wrecking ball and work began to reinvent it as a ‘meeja’-focused business centre, including the restoration of almost all of the original design features. It was an award-winning execution.

So now we have faithfully true new Black Cats, jolly Lower Nile colourwash detailing and an Art Deco sight to behold as we trundle through the patchwork of styles and eras that litter Hampstead Road and Euston today. It really is a huge place that thoroughly deserves celebrating its cheery if vaguely ridiculous historic scrub-up.

Mr Baron, who died only a few months after the opening, would surely be lighting up a ‘Craven A’ if he knew how the building has been preserved.