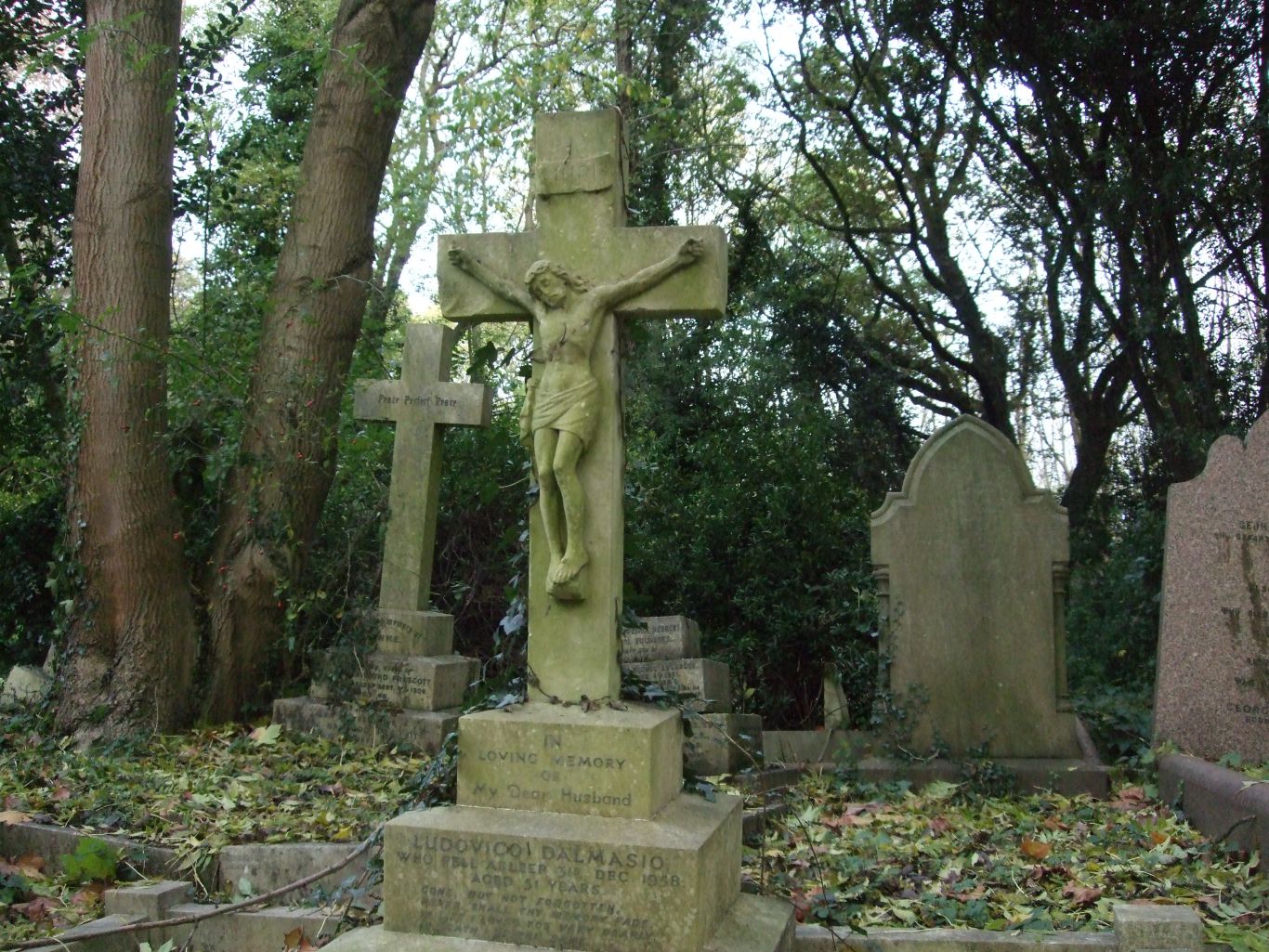 Highgate Cemetery – and the Tale of the Highgate Vampire

It’s not clear exactly what Farrant and Manchester did that night – but there were rumours of tombs being opened, and garlic chucked around a bit

Most readers will have, at some time, visited Highgate Cemetery, the world class high-Gothic nature reserve on the steep incline up to N6.

Dating back to 1839, it contains 170,000 corpses – that’s nearly as many people as the current (live) population of the borough of Camden. Most thrilling is the western side, only accessible by guided tour, such is the frailty and beauty of its hillside location.

Those Egyptian Catacombs! The Cedar of Lebanon! And it’s here you’ll find a roll call of names, from George Eliot to Beryl Bainbridge and Alexander Litvinenko, who was killed with polonium in 2006 and is entombed in a lead coffin to prevent radiation from leaking out.

Meanwhile, equally worth a few hours’ wander is the flatter eastern side, which anyone can visit for just £4. It’s most famously home to Kentish Town’s legendary former resident, Karl Marx, whose tomb was subject to attempted bombings in 1965 and in 1970. But that’s another story – for now.

For amongst these ivy-covered tombs and decaying statuary, deep in the shadowy woods, which have served as a location for movies like Abominable Dr Phibes, Taste the Blood of Dracula, and other cult horror flicks (not to mention recent novels like Niffenegger’s Her Fearful Symmetry), there once lurked a real vampire. And since it’s Hallowe’en, this is his intriguing tale.

In the 1960s the cemetery was dilapidated and prone to vandalism. One intruder was local bloke David Farrant who, after spending a night there in 1969, wrote to the Ham & High about seeing a ‘grey figure’, which he believed was supernatural. Dozens of other folk piped up (well, it was the sixties), describing all manner of ghosts, from spectral cyclists to disembodied voices. Yikes.

Things took a spookier turn still when another man, Sean Manchester, enthused about the existence of a ‘King Vampire of the Undead’, a medieval nobleman who had been buried on the site prior to its incarnation as a cemetery. The Ham & High naturally lapped all this up, with headlines like ‘Does a Vampyr Walk In Highgate?’

A week or so later Farrant reported in the paper that he had seen a spate of dead foxes – with no outward signs as to how they died. It’s worth adding that Farrant himself was never quick to wade in with the ‘V’ word, although by suggesting the existence of ghosts or vampiric figures he captured the public imagination in a big way.

‘If the sky is blue,’ he writes on his website, ‘then who am I to argue the shade? The term vampire was coined by the media. I simply refer to it by its common name, whilst my beliefs as to what it actually is, take second place to the sensationalist headline.’

The outcome? Why, a media frenzy of course, focusing on an ‘official’ vampire hunt on Friday 13 March 1970. By this point arbiters of popular culture ITV had lined up interviews with both Manchester and Farrant, broadcast early on the evening of the 13th – and within two hours a sizable crowd swarmed over gates and walls into the locked cemetery, despite police efforts to control them.

It’s not clear exactly what Farrant and Manchester did that night – but there were rumours of tombs being attempted to be opened, and garlic being chucked around a bit. But thankfully, no stakes through the hearts of the undead.

Farrant and Manchester persisted in their hunt for otherworldly presences, with the former being found soon after by police carrying crucifix and wooden stake, and the latter claiming (in his own book) that he forced open a family vault and was about to drive a stake through a body – but was deterred, at the last minute, by a companion. Thank goodness for that.

How did it end? Well, it sort of tailed off actually, after a rumour that Farrant and Manchester would meet in a duel on Parliament Hill on Friday 13 April 1973 never materialized. Farrant was jailed in 1974 for damaging memorials, which he insisted had been caused by Satanists, not him. On his website, this is his version of the story:

‘Eventually David’s unconventional methods, and the fascination of the press with his exploits, led to his notorious conviction at London’s Old Bailey in 1974 for what amounted to the practice of Witchcraft. Despite the fact that the Witchcraft Act had been repealed in 1951, a combination of the then openly corrupt Metropolitan Police and one of the most draconian and conservative judges in Britain led to combined sentencing of 4 years and 8 months. Partly as a result of this trial and David’s imprisonment, there were several significant changes to the British justice system in later years. These came far too late for David who continues to protest that although he may be guilty of youthful indiscretion (aren’t we all?) his only crime was practicing his then religion. Upon his eventual release in 1976 after a 7 week hunger strike, David continued to campaign to establish his innocence’.

In a brilliant addendum, Farrant is now president of the rather genteel-sounding Highgate Vampire Society.

We think the Highgate Vampire is a brilliant and fascinating example of modern day folklore, and if you’re interested, there are books and websites on the subject galore (see below).

And most recently, the legend has been brought back to life again by West Hampstead-based author Asa Bailey in a book and feature film (called the Highgate Vampire) with, apparently, a new twist and backstory.

For now, however, our yarn ends here…or does it? *Shudder*

OCTOBER 30th 2020 UPDATE: David Farrant sadly passed away in April 2019. Please scroll down and read the dozens of fascinating comments and debate on this feature.

Highgate Cemetery is open from 10-4pm between November and April (Admission £4, under 18s free). Last admission 3pm. Check their website for details of tours of the western side.

If you enjoyed reading this, perhaps you could help out? In November 2020, Kentishtowner will celebrate its 10th birthday. But with the sad demise of our free independent monthly print titles due to advertising revenues in freefall, we need your support more than ever to continue delivering cultural stories that celebrate our neighbourhood. Every contribution is invaluable in helping the costs of running the website and the time invested in the research and writing of the articles published. Support Kentishtowner here for less than the price of a coffee – and it only takes a minute. Thank you.